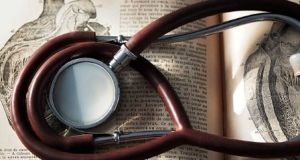 More than 950 “deserted and abandoned” and “illegitimate” children who died in the Dublin Union workhouse and associated institutions were sent to medical schools at UCD, Trinity and the Royal College of Surgeons between 1920 and 1977. File photograph: iStockPhoto

The bodies of hundreds of children who died in Ireland’s mother and baby homes were sent to medical schools to be dissected by students during anatomical examinations, the latest report of the Commission of Investigation of the Mother and Baby Homes has found.

More than 950 “deserted and abandoned” and “illegitimate” children who died in the Dublin Union workhouse and associated institutions were sent to medical schools at UCD, Trinity and the Royal College of Surgeons between 1920 and 1977.

Nine hundred and thirty two babies and children were aged between 10 minutes and 15 years at time of death, while 27 were stillborn, according to the fifth interim report by the commission.

The use of bodies of “unclaimed deceased residents” from workhouses and psychiatric hospitals in medical schools for anatomical study was “common practice” across the UK and Ireland until the mid-1960s and legal under the 1832 Anatomy Act.

Under the Act, any person who had lawful possession of the body of a deceased person could allow the body to undergo anatomical examination unless the deceased person had stated this was not to happen.

Bodies were not to be sent to medical schools for at least 48 hours after death to allow time for relatives to come forward, but this was rarely honoured, the report found.

In the case of “deserted or abandoned children” who died in institutions, there was “no one with the legal capacity” to object to bodies being used for anatomical studies. The bodies of “illegitimate” children unclaimed by mothers could also be used in the same way.

The report underlines that the provisions of the Anatomy Act, particularly time limits, were “rarely observed” and cites an internal Department of Health memorandum from 1983 which warned that bodies were removed on the day of death, not after 48 hours, as required in law.

In addition, bodies were “rarely” buried within the specified time. The commission found a “number of children” were transferred for anatomical studies from Dublin institutions before the legal time limit had passed.

Meanwhile, those involved did not believe that corpses used for anatomical studies should be later buried in the same way as other burials. In a 1961 letter, the Galway County chief medical officer argued that the separate burial of each body after dissection would “prove very costly and indeed wasteful of graveyard space”. The “dismembered bones, perhaps some entrails and muscles” could be accommodated in smaller coffins placed vertically in the ground, he wrote.

While the Galway medical school anatomical records for 1909-1997 do not include children, the commission found the remains of 35 children were supplied by a porter from Galway Central Hospital to the anatomy department between 1949-1964. Further records show 86 children from the Tuam children’s home died at the Galway Central Hospital, but burial records were only available for 50 of them.

A 1960s campaign encouraging the voluntary donation of bodies to medical schools seemed to bring an end to the practice, according to the report, while a 1984 Department of Health internal memorandum stated the practice of using unclaimed bodies for anatomical studies had ceased by the early 1980s.