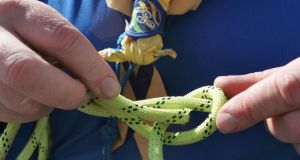 A team of specialist investigators from the sexual crime unit has been set up to co-ordinate the inquiries within the Garda National Protective Services Bureau. Photograph: Brenda Fitzsimons

This is the first time the extent of An Garda Síochána’s investigations into alleged historical abuse by scout leaders has been disclosed, since the scandal facing Scouting Ireland first came to light over a year and a half ago.

The alleged abuse primarily occurred between the 1960s and 1990s in legacy organisations, the Catholic Boy Scouts of Ireland and Scout Association of Ireland, who merged to form Scouting Ireland in 2004.

In a final report on the issue, Mr Elliott found sex offenders had risen to the “top level” of the former organisations, operated in groups, and protected other known abusers from being held to account.

The report, published in May, found child abuse was “tolerated” and covered up for decades to protect the scouting movement’s reputation.

Scouting Ireland first disclosed an internal review had identified 108 alleged victims and 71 alleged abusers in November 2018. A helpline set up by the organisation fielded more than 100 calls from other survivors in the weeks afterwards, with Tusla, the child and family agency, also setting up a dedicated helpline.

Allegations made to both these helplines were referred to gardaí, and a number of allegations were also reported directly to An Garda Síochána.

In a statement, a Garda spokesman said 65 new investigations were opened on foot of the referrals. Some 45 investigations were already under way in November 2018, and these would include inquiries into some of the 71 alleged abusers identified in Scouting Ireland’s initial review.

Previously, gardaí had refused to disclose how many active investigations it was pursuing. Scouting Ireland has consistently said a significant majority of the alleged abusers were deceased.

A team of specialist investigators from the sexual crime unit has been set up to co-ordinate the inquiries within the Garda National Protective Services Bureau.

Minister for Children Katherine Zappone is currently considering whether to launch a statutory inquiry into the allegations of historical abuse. Secretary general of the Department of Children Fergal Lynch has privately cautioned against such a move due to the ongoing criminal investigations.

In correspondence on the matter sent to the Department of Justice secretary general Aidan O’Driscoll last November, Mr Lynch said “we are very anxious to ensure that we avoid doing anything that risks compromising any criminal investigations or prosecutions”.

Discussions around an inquiry were put on hold until the publication of Mr Elliott’s report. However, there are now reservations over how much more information an inquiry could uncover, due to poor record keeping by Scouting Ireland, as well as the limitations imposed by ongoing criminal investigations.

Scouting Ireland has made an organisational apology over the past abuse, and set up a scheme to fund counselling services for survivors. Separately, about 40 survivors of past alleged abuse are seeking to take legal cases against the youth organisation.