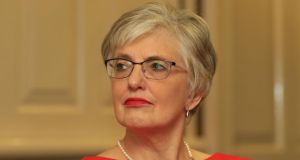 Minister for Children Katherine Zappone has asked officials to examine how parents can be informed at the earliest possible opportunity of concerns being investigated. Photograph: Nick Bradshaw

Tusla may be given the power to immediately close down or suspend services in creches across the country following an undercover investigation that revealed a pattern of disturbing behaviour and practices in a chain of Dublin crèches.

Minister for Children Katherine Zappone said she plans to strengthen quality requirements for early years services and has written to the chair of Tusla requesting that they outline the necessary changes to strengthen their enforcement powers. Changes to current legislation may be necessary so that permanent or temporary closures can happen, the Department of Children said this afternoon.

Ms Zappone has asked officials to examine how parents can be informed at the earliest possible opportunity of concerns being investigated. As it stands, Tusla can only publish reports after due process and this process can often take a period of time during which parents will be unaware that the regulator has concerns.

Ms Zappone also said she plans to add new regulations to make it mandatory for early years providers to prominently display a certificate of registration on their premises, alongside details of any conditions imposed by Tusla.

To date this year, Tusla has attached conditions to 95 Early Years Services.

“I was appalled to witness the intolerable treatment of children shown in the RTÉ Investigates programme last week. It was reprehensible to witness this type of behaviour despite having improved standards and regulations and increasing the number of inspections,” Ms Zappone said.

“It’s very important that parents understand that not every childcare facility in the country has issues like the ones shown last week. Most service providers work tirelessly to provide a great service and I commend those services.

“I am determined to provide, where necessary and where legally possible, the authority to strengthen Tusla’s powers to ensure all early learning care providers deliver a high-quality, child-centred service,” Ms Zappone said. Ms Zappone has said that establishment of a professional regulator should be prioritised.

The regulator would operate a fitness to practice function and would remove any practitioners who do not provide the correct standard of care. The Department of Children said it will also shortly announce the establishment of an independently chaired expert group to look at a new model of public funding, looking at affordability and quality in the sector.

Tusla and the officials from the department are due to appear before an Oireachtas committee on Wednesday to discuss the fall-out from the RTÉ investigates programme.

The investigation was carried out into Hyde & Seek, a multimillion euro company that runs four creches in Dublin with a fifth opening shortly.

Footage taken by undercover researchers over the past several weeks shows cots packed into rooms leaving it difficult to access babies in the event of an emergency. Further footage shows children being fed cheap instant meals instead of the dishes advertised to parents.

Footage also showed babies that were restrained in high chairs for lengthy periods, causing them to become highly distressed. In one instance a child was placed alone in a room with the door closed for misbehaving.