Men need to step up to their role in Feminism 4.0 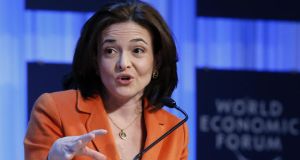 Of all the preposterous coverage of Nigella Lawson we have had to put up with, the Sun really took the poppyseed biscuit before Christmas with its revelations that the cook, an astoundingly busy career woman, had paid other people to do some stuff for her. Things that rich, busy people need to get done, such as catering and decorating a Christmas tree. For shame!

It is not known how well the unassisted domesticity of Charles Saatchi, her ex-husband, is coming along, whether he busied himself with fashioning a gingerbread house over the festive period or got stuck in making a turkey curry from the leftovers, took some time out to cross- stitch season’s greetings on bespoke cards wishing his neighbours a peaceful and prosperous New Year or designed his own Christmas crackers with useless plastic gifts inside. But who cares? Because, apparently, the matriarch of a household should be a superhero, capable of culinary, carnal and caring feats astounding enough for one’s loving husband not to get the belt out.

Invented shortcomings
This non-scoop, the Sun trumpeted, cruelly came at a time of the year when parents are stressed out of their wits, trying to figure out whether the turkey will in fact fit in the oven without them ending up pixelated on a food safety ad; hoping the dolls for their daughters aren’t too slutty and the toolbox for their sons won’t lead to the cat being stabbed; and balancing relations and tensions and a conveyor belt of cuisine and diplomacy. By inventing a celebrity parent’s shortcomings, the Sun has condemned everyone who ever thought “Screw it” and finally got a cleaner in to do the bits they don’t have time to do, or anyone who drops their kid off in a creche on their way to work, or anyone who opted for Marks and Spencer three-for-two party food because one simply does not have the time to fashion one’s own brie and cranberry tartlets in filo pastry because one has a bloody life.

Reflecting on this year, it was one on the crest of a fourth wave of feminism. This fourth wave should really be titled Feminism 4.0, thanks to contemporary feminist ideas and voices going viral. At last the internet fulfilled one of the promises of its loose democratic ideology by providing a platform for female authors and creators, who are still marginalised across the worlds of media and entertainment. Yet at the death of 2013, women were reminded that delegating and outsourcing are definite no-nos for working mothers. The unlikely icon of Feminism 4.0 is Lawson, whom many women are blindly supporting, not because she’s perfect but because they empathise with her. Lawson has about as much in common with most women as Kim Kardashian does but her chin-up attitude evokes an Irish mother’s phrase: good girl yourself.

‘Lean In’
This year was also characterised by more discussion about businesswomen, specifically women in the tech industry and the problem of underrepresentation. Facebook chief operating officer Sheryl Sandberg’s Lean In, one of the year’s bestselling books, instigated a huge amount of debate, particularly among feminists, who have a tendency to take an opinion as the opinion.

Of course there are endless perspectives on how to get on with one’s life as a woman, and Sandberg’s was just one of them. The reason this amplification of a singular perspective occurs is due to the marginalisation of “serious” women’s voices. So when one comes along, everyone simultaneously jumps on it and elevates it. Blokes don’t have to do that, because they talk about and to each other all the time, in their films and TV shows and parliaments and financial institutions and advertising agencies. Presumably once everything rights itself, in a few decades’ time, we’ll look at tomes such as Sandberg’s with the same amused curiosity with which we survey Victorian manuals on etiquette.

But women, even Sandberg and Lawson, still get the crumbs from the table in terms of verbal and visual representation that isn’t about giggling and tits. So when a decent slice comes along, such as Lean In, we loaf it. But the what-to-make- of-it-all clue is in the title of Sandberg’s book. If 2013 was about women leaning in, perhaps 2014 should be about men leaning out. Gender equality cannot happen solely by women leaning in. What are we leaning against? And why won’t these invisible boulders give way? Who is pushing from the other side? Everything would be much easier if men got on board.

I was on the current affairs programme, Midweek, on TV3 recently discussing the gender pay gap. A male panellist was asked if he was a feminist. He replied, with a bit of a grin, “No comment.” How outrageous. Feminism is about equality. Would a person on television be so happy to reply “No comment” if they were asked whether racism was okay, or whether people should be persecuted for their religious beliefs? Why won’t men embrace feminism when it benefits all of us? Women can do only so much leaning in while men stand their ground with arms folded in our direction. Women: make your new year’s resolution to keep leaning in. Men: lean out.