Many states question Irish record on abortion at UN 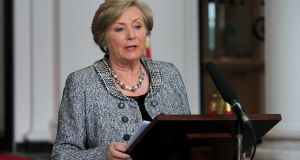 Tánaiste and Minister for Justice Frances Fitzgerald led a delegation of 22 senior civil servants from across government departments to the UN for Ireland’s second examination under the Universal Periodic Review process. Photograph: Gareth Chaney/Collins

The rights of people with disabilities, access to abortion services and prisoners’ rights were most frequently raised at the United Nations in Geneva today, where Ireland faced questioning on its human rights record.

The marginalisation of Travellers, racism, domestic violence and non-Christian children’s access to education were also issues that featured prominently.

Tánaiste and Minister for Justice Frances Fitzgerald led a delegation of 22 senior civil servants from across government departments to the UN for Ireland’s second examination under the Universal Periodic Review (UPR) process.

Ireland was first reviewed in 2011.

This process differs from other UN rights examinations, such as that in January before the UN Committee on the Rights of Child, where questions are put by committees of human rights experts.

Under the UPR, Ireland faced questioning from peer UN member states. As such, the review is regarded as more political and by some as more serious for Ireland’s reputation on the global human rights stage.

Wednesday’s proceedings were also marked by a more diplomatic tone in questioning, with all states making congratulatory remarks about such developments since 2011 as the passage of the same-sex marriage referendum in 2015 and the children’s rights referendum in 2012.

While six states - including Germany, the Netherlands and Sweden - had lodged advance questions on access to abortion services, the issue was raised by many more states at the session in Geneva, including Canada, France, the US, Lithuania, Macedonia, Switzerland, the Republic of Korea and Iceland.

Slovenia recommended Ireland “decriminalise abortion in all circumstances and, as a minimum, ensure access to safe abortion also in cases of rape, incest, serious risk to the health of the mother or fatal foetal abnormality”.

Ms Fitzgerald, who arrived about two hours into the three-and-a-half-hour session - having been delayed by Government business in Dublin - described abortion as a “live issue” in Ireland and one where “respect” for all views was necessary.

“Recent public debate has concentrated on extending the law on abortion to cover cases of fatal foetal abnormalities, or cases where a woman is pregnant as a result of rape, to a broader legal regime that allows abortion where the health of a woman is of concern.

“None of the above measures is possible under the current regulation of constitutional and statute law,” she said, and outlined plans for a Constitutional Convention to meet and make recommendation on the issue.

More than 40 states raised Ireland’s failure to ratify the Convention on the Rights of Persons with Disabilities (CPRD), with some, such as New Zealand, pointing out Ireland had signed it in March 2007.

Once ratified, CPRD would confer legally binding rights on people with disabilities, where the current approach in Ireland is regarded as “charity-based”.

Ms Fitzgerald guaranteed this would be ratified “before the end of the year”.

The failure to ratify the Optional Protocol to the Convention Against Torture (OPCAT) also featured, with more than 20 states recommending it be ratified “without delay”.

OPCAT particularly relates to prisoners and their right not to be subjected to “torture and other cruel, inhuman or degrading treatment or punishment”.

The Holy See was among those calling on Ireland to “continue with its efforts to bring incarceration facilities into line with international standards, especially regarding overcrowding, cell sanitation and the separation of young prisoners”, while Switzerland noted Ireland had accepted recommendation to ratify OPCAT in 2011, and still had not.

The US,UK, Spain, Slovenia and Czech Republic were among states recommending Ireland do more to ensure all children have equal access to education, “irrespective of faith”.

Gavan O’Leary, principal officer at the Department of Education, said 400 new multi- or non-denominational schools would be opened in Ireland by 2030.