Nearly 1,200 died when the ship sank after being struck by a torpedo in May 1915 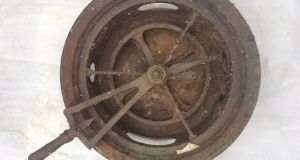 Salvaged: one of the telegraph machines from the sunken ship ‘Lusitania’. Photograph: Eoin McGarry

One of the telegraph machines from the sunken ship the Lusitania has been recovered from the ocean floor off the coast of Co Cork, Minister for Heritage Heather Humphreys has said.

Dungarvan diver Eoin McGarry, working under licence from the Minister, raised the machine from the sea bed on Saturday. He undertook the dive to complete an operation that had previously brought up the pedestal for the bridge telegraph during the summer.

Along with Greg Bemis, owner of the Lusitania wreck, he intends attempting to recover the ship’s bridge telegraph next year.

The Lusitania was struck by a torpedo from a German U-boat off the Head of Kinsale on May 7th, 1915, while en route from New York to Liverpool. The cause of a second explosion on board, which resulted in the vessel sinking with the loss of 1,198 lives, is still being investigated.

According to the book Lusitania: An Irish Tragedy, about 140 Irish people died when the ship went down: 70 passengers and 70 crew. The best-known would have been the art collector Sir Hugh Lane, but others included James McDermott, the ship’s surgeon, and his assistant, Dr Joseph Garry, and the composer Thomas O’Brien Butler.

Another who died was one of the richest men in the United States, Alfred Vanderbilt.

As the wreck is more than 100 years old, all diving operations on it automatically require a licence from the Minister under the National Monuments Act. The wreck is also covered by an underwater heritage order because of its international and historical importance.

Ms Humphreys said it was “great news that the telegraph was safely on shore and will now be conserved by Mr Bemis, who hopes to place the artefacts recovered from the Lusitania on display locally, which, of course, would be of great benefit to the people of Kinsale”.

Mr Bemis congratulated Mr McGarry and his team “for their diligence and success in very difficult recovery efforts, made all the more difficult by weather, tides, and lack of visibility at 90-plus metres”.