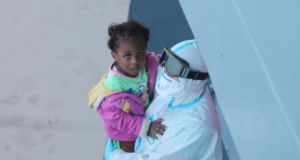 The Naval Service patrol ship LÉ Niamh rescued 380 refugees and migrants from the Mediterranean Sea north of Libya during three search and rescue operations on Friday.

The Irish patrol ship was tasked by the Italian Marine Rescue Coordination Centre on Friday morning to investigate the sighting of a possible migrant boat 58km northeast of Tripoli in Libya.

It arrived at the scene at 8am and deployed two inflatable boats into the water to rescue the 107 men, 14 women and three children on board the stranded vessel.

By 9.47am all of the 124 people were on board the LÉ Niamh receiving water, food and medical assistance where required.

The Medecins Sans Frontiére vessel the Dignity 1 was also at the scene to assist in the rescue operation.

The LÉ Niamh was then sent to another vessel 9km south of the initial rescue mission, whereit rescued a further 127 people by 11.53 am.

The LÉ Niamh was then tasked to a deflating rubber craft, where it rescued another 129 people as part of a joint operation with the Italian naval vessel the ITS Alesio.

Today’s efforts will bring to 21 the number of rescue operations carried out by the LÉ Niamh since it was deployed to the Mediterranean in July.

Ireland’s involvement in the European Union’s Triton search and rescue initiative began last May with the deployment of the LÉ Eithne, which was replaced by the LÉ Niamh in July.

The LÉ Niamh and LÉ Eithne have rescued a total of 6,720 refugees and migrants from the Mediterranean since the initiative began in the spring.

This number excludes the 380 people rescued on Friday morning, as numbers remain provisional until confirmed by Italian port authorities.

The Irish patrol ships have also recovered the bodies of 39 people since operations began.

The Irish Naval Service announced earlier this month it would extend its involvement in humanitarian search and rescue missions in the Mediterranean.

Under the new plans, the LÉ Samuel Beckett will take over operations in the Mediterranean from the end of September, when the LÉ Niamh is due to finish its mission, until November 30th.

Meanwhile, the UN Refugee Agency (UNHCR) has warned that time is running out for European leaders to resolve the refugee crisis, saying the chaos and confusion on Hungarian borders was being caused by the absence of a coherent and united response.

More than 442,440 refugees and migrants have arrived in Europe via the Mediterranean so far this year, while some 2,921 people have died making the journey.

According to the UNHCR, 4,000 people are arriving on the Greek islands every day.

The agency warned that the uncertainty and lack of information around the crisis had created a “fertile environment for people-smugglers and others seeking to prey on this vulnerable population”.

The agency called on European leaders to begin the immediate relocation of 40,000 refugees from Greece and Italy to the European nations who have agreed to welcome them.

It also called for an emergency EU package to assist Serbia in registering and relocating refugees to other European countries.