LÉ Eithne crew welcomed home by loved ones in Cobh

Naval Service boat came to assistance of more than 3,000 migrants in Mediterranean 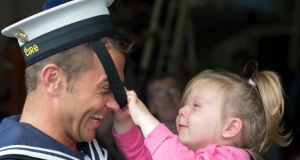 Chef Paul O’Shea with his daughter Caoimhe (2) on Friday as the LÉ Eithne returned to Haulbowline. Photograph: Michael Mac Sweeney/Provision

An Able Seaman who returned from a search and rescue mission in the Mediterranean on board the LÉ Eithne clearly had his priorities in order on Friday as he arrived quayside with a birthday cake for his long-term partner.

Stephen Lynch from Cobh, Co Cork, was hugged by his son Ewan (9) and daughter Fay (7) as he presented the cake to his partner Donna Stapleton who was celebrating her 29th birthday.

Mr Lynch said having his children and partner wrapped around him in a warm embrace was a “brilliant” conclusion to an emotional two months of humanitarian work.

“It was very hard. Difficult conditions. Tiring and long hours but everything went very well and it was a success. Hot weather. We aren’t used to it being Irish. When you see a little boat with 100 people squashed into it. It’s not nice.

“Seeing the [family]. You couldn’t ask for anything else. I am looking forward to relaxing with the family.”

Ms Stapleton admitted she was looking forward to normal family life after being without her partner for nine weeks.

Mr Lynch was among 70 LÉ Eithne personnel greeted by family members at Haulbowline Naval base shortly before lunchtime on Friday following the completion of their mission in the Mediterranean.

Since deployment, the LÉ Eithne has located and come to the assistance of 3,377 persons during 22 operations. Five per cent of those rescued were children under 12.

Minister for the Marine Simon Coveney said seeing members of the Naval Service return from an overseas mission was a “historic” day for the country. He stressed the mission was physically and mentally gruelling for the crew.

“The crew of the Eithne did a phenomenal job. It is a special day for the Defence Forces. You do experience these kinds of days when people come home but the Naval Service has never experienced anything like this and Cork Harbour has never experienced anything like this. It is the first real overseas mission that the Naval Service have taken and they have come through it with flying colours. I am hugely proud.”

Mr Coveney added the base was “buzzing” as in addition to the return of the LÉ Eithne the €62 million new patrol vessel, LÉ James Joyce, was also officially delivered from the UK.

Commenting on the commissioning of the Devon-built vessel, the Minister said: “I would like to commend the commitment of all concerned in ensuring the delivery of this high-quality ship which will serve the country over the next 30 years.”

“We knew it was going to be difficult and demanding. But nothing prepares you for the intense heat and the terrible human suffering you see at first hand almost every day.”

The decision to send the LÉ Eithne was taken earlier this year in response to the huge numbers of migrants dying as they fled war and economic deprivation and attempted to make it to Europe.

The European Union plans to resettle 44,000 of those who made the risky sea crossing. It is estimated a further 1,850 drowned so far this year, attempting to get into southern Europe.

Of those rescued by the boat’s operations, 12 per cent each came from Eritrea and Nigeria, 11 per cent from Sudan and 9 per cent from Syria. Other nationalities included Moroccans, Somalis, Ghanaians and Ethiopians.

The LÉ Niamh will now replace it. Its 57-person crew will remain in the Mediterranean until September.