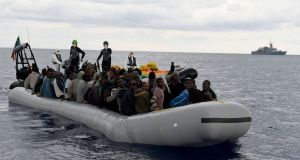 The former naval vessel, the LÉ Aoife, left Cork Harbour on Saturday morning for Malta, where it will take part in humanitarian search and rescue operations and coastal protection duties in the Mediterranean.

The State donated the decommissioned LÉ Aoife to the Maltese armed forces in January, as part of an agreement between the two countries on expanding cooperation on defence matters.

The LÉ Aoife, which was decommissioned at the end of January, was the longest-serving vessel in the Naval Service, with some 35-years’ service.

It had travelled in excess of 600,000 nautical miles during its service.

It had also been involved in the boarding of more than 4,700 vessels at sea and had detained more than 440 fishing vessels.

It was reported in February that members of the armed forces of Malta were concerned about the age of the LÉ Aoife.

Maltese military personnel were said to have raised concerns about the LÉ Aoife’s ability to launch a small craft from its stern and the lack of a large holding area to accommodate migrants rescued while crossing the Mediterranean in small craft from north Africa.