Kenny an activist on the street and now the Dáil

Gino Kenny was elected to Dublin Mid-West on the third attempt. The People Before Profit candidate talks about his plans as a TD and how the water charges protest 'changed everything.' 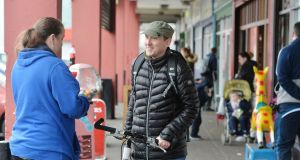 When Mary Kenny (77), mother of new TD Gino Kenny, moved to the suburb of Neilstown, west Dublin, in 1978, there was “nothing here”, she says. She and her late husband, Eugene, with four young children, chose the area as it was close to his job in Ballyfermot.

“We moved out from Islandbridge, which was a great place to live, but we only had a two-bedroom flat [there],” she says. “But [in Neilstown] there was no post office, no shops. Even the church was in a prefab. There was a bus about every two hours. We were just put out here with nothing.”

The fourth TD elected to the four-seater Dublin Mid-West constituency, he is the first TD from Neilstown.

Though there are now shops, including a post office and a pub, the area remains one of the most deprived in the State.

“This is a great community,” says the new TD. “But it’s been brutalised by austerity. People feel everything has been pulled from them. The Government didn’t get just how hurt people have been.”

He points to an ongoing drugs crisis. Cuts to services, particularly for young people have been devastating, he says, as well as unemployment and the homelessness crisis.

A councillor since 2009 on South Dublin County Council, he sees his main role as an “activist – on the streets”.

He supported striking Greyhound workers in 2014, joining pickets almost every day of the 14-week strike, and bricklayers in the 2014 JJ Rhatigan strike.

“A lot of those workers are from this area,” he says. “It was important to give practical support.”

For the past three years he has worked with Clondalkin Equine Club to get a site for horse stables in the area. Roaming horses have long been a problem in Neilstown. In 2014 the council impounded and destroyed more than 400 horses at a cost of €125,000.

Though initially dubious about an equine club, the council has now committed to co-funding one with the Department of Agriculture. Just before Christmas, councillors unanimously backed Kenny’s initiative, which now has planning permission and should be open by autumn on a three-acre site owned by the council.

“It just seemed so unjust to me that it was okay for wealthy kids to own horses, but if kids from around here did, it was ‘antisocial’,” Kenny says. “Destroying the horses cost so much and caused huge distress. It is a great discipline to look after a horse. It’s a great interest to have.”

He attracted multiple transfers throughout the 12 counts. He attributes the 4,629 first preferences both to his work record and to the increased politicisation of his community.

The 2011 general election saw turnout of about 50 per cent, and last weekend tallied turnouts for boxes from the area indicated a turnout of 56.5 per cent.

The issue that really galvanised people, says Kenny, was water charges. “When it started two years ago, we went estate to estate, street to street, organising to resist the water meters. The installers came in twice to this area and never got a metre in.”

The large national protests “gave people a real sense of empowerment . . . Soon people weren’t just talking about water, but about cuts to services, housing, about the kind of society and politics they wanted. People believe a better world is possible. That is changing how they think and how they vote. ”

As he talks Kenny is approached by Debbie Reddin (15), who describes him as “really inspirational”.

“When you’re from somewhere like Neilstown, people have a stereotype of you. People just think ‘scumbag’. But Gino shows you can overcome that. You can say, ‘I’m not going to do the stereotype. I’m not going to let people think that about me’,” she says.

Another woman, Mary Duffy, didn’t vote in 2011. She gave Kenny her first preference this time. “He’s one of our own. He knows what we’re struggling with, and he does what he says he will.”