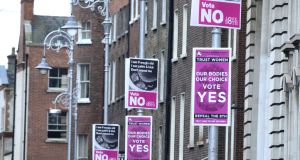 The repeal side maintains a strong lead in the abortion referendum campaign with today’s Irish Times/Ipsos MRBI opinion poll suggesting there is a clear majority in favour of removing the constitutional ban on abortion.

Although support for repeal has slipped somewhat since the last poll in January, there is no growth in the support for retaining the Eighth Amendment of the Constitution, while a fifth of voters say they have yet to make up their minds.

This represents a nine-point drop in support for repeal since January. Crucially however, support for keeping the Eighth Amendment has not benefitted, and in fact dropped marginally by one point.

Fianna Fáil voters are the most supportive of retaining the amendment (37 per cent), but more of the party’s supporters (39 per cent) favour repeal.

Support for the retention of the constitutional ban is strongest with older voters (49 per cent among the over 65s), voters in Leinster outside Dublin (32 per cent), farmers (36 per cent) and the lowest income voters (34 per cent).

While there may be some concern among repeal campaigners at the tightening of the race, and especially the slippage in their support below the 50 per cent mark, the strength of the repeal position among voters is revealed by a series of additional questions in today’s poll.

Asked about the strength of their conviction for their position, almost 80 per cent of declared repeal voters said that they would “absolutely never” change their mind, or were “extremely unlikely” to do so. Commitment to their declared position was even higher among retain voters.

Voters also displayed a high degree of knowledge about the Government’s proposals for what would come after the repeal of the Eighth Amendment if the referendum is passed. Asked if they were aware of the plans for legislation to allow abortion on request up to 12 weeks, 85 per cent of voters said they were aware, with 15 per cent unaware. The figure rises to 90 per cent among repeal voters.

The poll also suggests that commitment to the idea of liberalising Ireland’s abortion laws retains a high degree of support; 62 per cent of voters agreed with the statement that the law needs to change to recognise a woman’s right to choose, while 56 per cent agreed that the 12 weeks proposal, while they had “reservations” about it, was a “reasonable compromise” and would be an “improvement on the current situation.”

By contrast, just 41 per cent agreed with the statement: “I agree the law needs to be changed but the proposal for abortion on request up to 12 weeks goes too far.” A similar proportion (40 per cent) said that abortion “is wrong and should not be made more widely available”.