Irish pregnant women have highest rates of depression in OECD

One in six women ‘are at probable risk of depression’, Trinity antenatal study finds 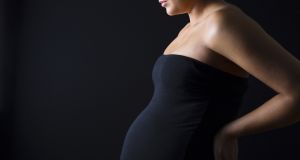 Ireland’s rate of 16 per cent of women being at risk of depression during pregancy compares with the 34 other OECD countries where rates are between 10 per cent and 15 per cent. Photograph: iStock

Irish women have among the highest levels of depression during pregnancy in the OECD, the first study of the issue in the State indicates.

The study, published on Tuesday by the Trinity College Department of Psychiatry, finds one in six women – 16 per cent – “are at probable risk of depression” during pregnancy.

This compares with the 34 other OECD countries where, international literature indicates, antenatal depression rates are between 10 per cent and 15 per cent.

Lead researcher on the study, Prof Veronica O’Keane , said perinatal psychiatry services were “grossly under-resourced”. This needed to be addressed in the National Maternity Strategy, she said.

In addition pregnant women experiencing depression often either did not recognise they were depressed, or were reluctant to seek help. This had implications for their own, and their babies’, well being.

It found the risk of depression and depression rates increased as pregnancy advanced, with the highest rates (17.2 per cent) among women in their third trimester.

The overall at-risk rate of 16 per cent, found in this study, is likely to be an under estimation as the majority of respondents were educated to undergraduate level – a protector against depression. The study did not include women who could not speak English – a group in Ireland that is more likely to be socially marginalised and at greater risk of depression.

Ireland has the second highest birth rate in Europe – after France. In 2014, there were 68,000 births meaning, the study says, more than 11,000 women could be experiencing depression.

The study says there is growing evidence that depression during pregnancy can “compromise the physical and mental health of the infant”.

The stigma around depression, and seeking help, was felt to be greater for pregnant women as pregnancy was “a time . . . conventionally associated with happy anticipation”.