Avril Patterson has worked in conflict zones in Syria, Kenya, Afghanistan and Liberia 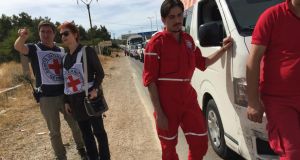 She has grown accustomed to working in conflict zones and emergency situations having also spent time in Kenya, Liberia and Afghanistan.

However, the health emergency unfolding in Yemen, a nation suffering from a humanitarian disaster and devastated by four years of war, can feel overwhelming, she says.

“It all comes back to health,” Ms Patterson told The Irish Times from the Yemeni capital, Sanaa.

“The fact that there’s extreme poverty in this country, if people cannot eat, their health will be affected; if they don’t have access to drinking water, of course, cholera becomes a massive problem.

“In Yemen first and foremost it’s about survival. People want to feel safe. Then they want food, water and shelter.”

Ms Patterson, who trained in Belfast City Hospital, has spent the past eight months leading the International Committee of the Red Cross’s health programme in Yemen.

At present, 16.4 million people in the country do not have access to adequate healthcare while 17.8 million are living without enough food.

Ms Patterson says Yemeni women traditionally prefer to give birth at home, which is not a problem if the delivery has no complications.

We come as foreigners with our own perceptions of what equality means and, in a cultural context different from our own, it means something different

However, many women are choosing not to take the risk of travelling to hospital, even when they need a Caesarean section or emergency medical attention.

“A lot of safeguards for women fall apart in conflict. A woman who is pregnant asks herself, should she make a risky journey to have antenatal care or should she just crack on and not worry about it. Most women will stay where they are.”

The other problem is many of these Yemeni mothers are teenagers.

Child marriage rates in Yemen have risen in recent years with 66 per cent of girls under 18 being married off in 2017. In certain regions, 44 per cent of all marriages involved girls under 15.

“This is where we see complications ... and damage to women who are too small or young to have children. Pregnancy on a woman’s body already takes a big toll and then you have someone whose body physiology is too young to manage or having repeated pregnancies with no breaks,” Patterson says.

The escalating conflict and displacement of people from their homes also creates a greater risk of sexual exploitation and abuse with increasing numbers of women reporting incidences of sexual violence.

Ms Patterson describes the issue of gender-based violence as a “highly sensitive issue” which must be approached by health professionals in Yemen with extreme caution.

“If you shine a spotlight on something hidden you can potentially do more harm. Coming as foreigners you don’t want to create problems and leave more problems,” she says.

“So you create a safe space. If you have it under an umbrella of ‘victims of violence’ and don’t specify that it’s sexual you’re much more likely to reach women.”

Despite the many hardships facing Yemeni women as the conflict persists, Ms Patterson argues that “women here are stronger than people imagine”.

“There is definitely a respect for women but equality is quite a difficult word. We come as foreigners with our own perceptions of what equality means and in a cultural context different from our own it means something different,” she says.

“Sometimes we think women here are hiding in the corner but women do have a voice. And there’s no point in talking to a woman about gender equality if she’s worrying about her child dying of malnutrition.”