More than 120,000 around world set to take part in Pieta House Darkness Into Light walks 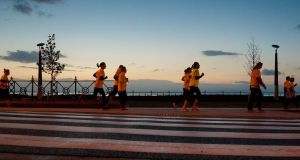 The early morning Darkness into Light 5km walk, which was first held in Dublin’s Phoenix Park eight years ago, will take place at 80 locations around the world on Saturday. Photograph: Joe Keogh

Irish emigrants around the world are “leading the way” in encouraging communities to open up about mental health issues, according to the founder of Pieta House.

Joan Freeman says Irish people have learned to stop hiding their mental health problems “under the carpet” and have removed the stigma that was once attached to speaking openly about their struggles.

“We’ve opened now in New York and the attitude there is about 2-3 decades behind Ireland, ” said Ms Freeman. “Opening in New York is about changing the perception of suicide and changing the social fabric of it.”

More than 120,000 people around the world are set to take part in the annual Pieta House Darkness into Light mental health awareness event this Saturday.

The early morning 5km walk, which was first held in Dublin’s Phoenix Park eight years ago, will take place at 80 locations around the world including Sydney, Vancouver, Abu Dhabi, New York and San Francisco.

Ms Freeman underlined the important symbolism of holding a Darkness into Light walk on San Francisco’s Golden Gate Bridge to help raise awareness of mental health issues on the west coast of the US.

“People all over the world would go there to take their lives,” said Ms Freeman. “We’ll be changing it into a bridge of hope to change the whole perception of the bridge.”

Ms Freeman described the walks as an act of solidarity – “it’s not only a healing process for many people but also a war cry saying we are doing something about suicide in the country.”

Ms Freeman also called on the Government to acknowledge their dependency on charities across the State in providing vital social services to the Irish people.

“As far as I’m concerned the Government spends according to how they value society,” she said. “Mental health has never been anywhere near their priorities.”

“No Government would be able to provide a service like Pieta House. We have 10 centres, 180 staff, a turnover of 7 million a year and 90 per cent of that is provided by the people of Ireland.”

Ms Freeman commended the many young people who have chosen to speak publicly about their struggles. “This time 10 years ago that would never have happened,” she said. “Not only are these people speaking openly about mental health but many are men.”

Dublin’s Phoenix Park Darkness into Light morning walk will begin at 4.15am on Saturday May 7th.