Hundreds gather at Dáil to urge sanctuary for Calais children

Sr Stansilaus Kennedy: ‘We can make our decision and choose to do something about it’ 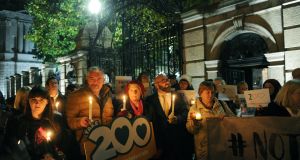 Members of the public at the “Not On Our Watch” candlelight vigil outside Leinster House on Wednesday night calling for Ireland to house 200 children from the former Calais “Jungle” refugee camp. Photograph: Aidan Crawley 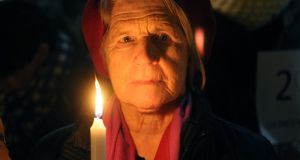 Sr Stanislaus Kennedy: “It is unconscionable that we have 1,500 unaccompanied children abandoned.” Photograph: Aidan Crawley

Several hundred people gathered outside the Dáil on Wednesday night for a candlelit vigil calling for Ireland to house 200 children from the Calais migrant camp.

On Wednesday morning French authorities began moving 1,500 unaccompanied minors from a temporary centre next to the now demolished Calais “Jungle”, as the Dáil prepared to debate a proposal to bring 200 of them to Ireland.

Thirty buses with a capacity of 50 passengers each were dispatched to Calais to transport the children to 60 centres across France, created specially for minors since last week, the prefecture of Calais said.

French president François Hollande said this week the children would be transferred within days to “dedicated centres” where British officials can explore whether they have the right to UK asylum. Mr Hollande said the others would be put in the care of French child welfare services.

Those at the vigil held candles and posters with the hashtag #NotonOurWatch.

#NotOnOurWatch "we have the support, we can do it" where would our heart be if our own were left abandoned - AR on #Calais in #Dail chamber 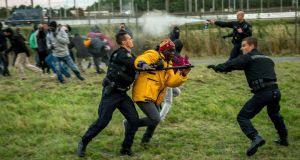 Dr Fergus O’Farrell, lay leader of the Methodist Church in Ireland, said in recent days he had dialogue with several other churches at the European Commission about the issue.

“The most shameful day of my life was when they put up the chart showing countries [that had] received unaccompanied children from Calais and Ireland had received one,” said Dr O’Farrell.

“It is absolutely disgraceful how callous the member states of the European Union have become. There is a great moral stain now attaching to the European Union and we are being marked by that stain. This is an opportunity for the parties in Leinster House to move and show leadership on this issue.”

Sr Stansilaus Kennedy called on the Government to commit to taking 200 children from Calais.

“We are not asking 200 children come today or tomorrow, we are asking for the commitment to be made.

“It is unconscionable that we have 1,500 unaccompanied children abandoned on our shores, in our neighbourhood,” said Sr Stan.

“We can make our decision and choose to do something about it. It ’s about will of civil society and organisations but for the government to make the decision and take action,” she said.