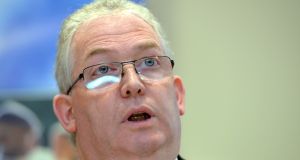 HSE director general Tony O’Brien said Ann’s family had been encouraged to stop sending their daughter to the foster home from 2009 but were not told of the abuse concerns.

The HSE did not tell the family of a woman with severe intellectual disabilities of its concerns about a risk to her of sexual abuse at a foster home in which she was staying because its legal advice was not to do so.

HSE director general Tony O’Brien told the Public Accounts Committee (PAC) it was the HSE’s legal advice that, because there was a report being compiled for it on allegations that another woman in the foster home - being referred to as Grace - was subject to sexual abuse, the HSE could not tell the second woman’s family the details of its concerns about the foster home.

The second woman, being referred to as Ann, continued to stay at the former foster home in the south east four years after the HSE had removed the last vulnerable adult it had placed there (Grace).

Ann went to the home for 21 years, between 1992, when she was 12, until October 2013. She spent 12 nights per fortnight in the home until the HSE eventually insisted her family stop placing her there, the Oireachtas committee was told.

Ann was brought there privately by her family, going home every second weekend and continued to stay at the home despite the fact that Grace had been removed in 2009 amid serious concerns about alleged rape and neglect.

The removal of Grace occurred 13 years after the HSE had ceased all new placements in the home due to the alleged abuse concerns.

The HSE had said Grace was the last person placed in the home. However, last weekend it emerged another vulnerable adult, Ann, had been staying there, though had not been placed there by the HSE.

Mr O’Brien said Ann’s family had been encouraged to stop sending their daughter there from 2009.

He agreed a number of contacts, including a HSE social worker, had told the local HSE team in Ann’s family’s area, that she should not still be staying at the home.

“During June 2011, having been contacted by the gardaí, the HSE team at local level engaged with [Ann’s] family again to confirm there was a Garda investigation, to advise them of concerns and to invite them to make direct contact with an Garda if they wished.”

Asked by PAC member John Deasy TD (FG), whether her family were told the “tenor” of the concerns about the home, whether they were told about the alleged sexual abuse at the home, Mr O’Brien said it was his “understanding” that they were not.

Ann’s family, despite the HSE’s invitation to them to place her in alternative care “confirmed they had no concerns regarding the foster family and wished to continue their part-time contact with the foster mother”, said Mr O’Brien.

Pat Healy, HSE national director for social care, said that because Ann was an adult at this stage the HSE had no legal capacity to stop her family placing her there or to stop the home having her.

In October 2013 however, the HSE “demanded the foster family cease all care activity which was either current or which they might be minded to engage in towards the future”.

Mary-Lou McDonald TD (SF) said the implication that the state had no responsibility for Ann’s welfare, reminded her of the arguments the State had made around the “private” placing of women in Magdalene laundries. She said the state had responsibilities toward people using the home as a care setting.

Mr O’Brien was severely criticised at the meeting for the HSE’s handling of the matter.

Mr Deasy asked Mr O’Brien whether it was true that neither the foster home nor Grace had been visited by a social worker between 2001 and 2007. Mr O’Brien said this was his understanding.

Mr Deasy said that wasn’t just a “missed opportunity” to save Grace, it was “extremely serious, negligent to extraordinary proportions”.

Mr O’Brien said he was concerned, if the HSE went back though files and cases over the years, they would “find issues in other parts of the country”, with regard to safeguards and protections of vulnerable children and adults.