Group wants private houses, on Nama held site in Castleknock, to be used for social housing 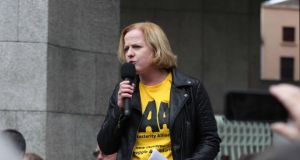 Anti Austerity Alliance TD Ruth Coppinger is part of a group that has occupied the site of a Nama-funded housing estate under construction in Castleknock, Dublin. Photograph: Stephen Collins/Collins Photos.

Homeless people and Anti Austerity Alliance (AAA) members have occupied the site of a Nama-funded housing estate under construction in Castleknock, Dublin.

The group, including AAA TD Ruth Coppinger have entered a property at the Diswellstown Manor site, opposite the Castleknock Hotel and Country Club, where 156 homes are under construction. The protesters want the estate to be used for social housing.

“We took the action of coming onto this site to highlight the scandal that state-owned Nama is building these 156 expensive homes to sell on the open market while 117 Blanchardstown families are in emergency accommodation. Their misery could be ended if this estate was turned over for social housing,” Ms Coppinger said.

A spokesman for Nama said the site owner is a Nama debtor, but Nama does not own the site, which is in receivership and is being developed by David Carson of Deloitte Ireland.

The land was being developed in accordance with planning permission which stipulates that social housing be included as part of the development, the spokesman said.

“A number of units in this development will be delivered for social housing in line with planning. Overall Nama has so far delivered 1,518 social houses across 150 individual projects with 628 in Dublin, 226 in Cork and 154 in Galway.”

Work was continuing on site, he said despite the occupation of one of the houses.