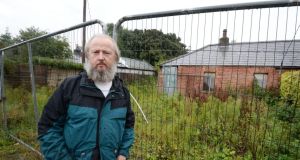 John Cantillon: suing Dublin City Council, Ireland and the Attorney General for allegedly failing to compensate him when the council compulsorily purchased his house four years ago. Photograph: Alan Betson

A homeless Dublin man is suing Dublin City Council, Ireland and the Attorney General for allegedly failing to compensate him when the council compulsorily purchased his house four years ago.

John Cantillon, who was the owner of a two-bedroom cottage at Cokeoven Cottages, Phibsboro, is now living in a hostel in Rathdrum, Co Wicklow.

A former community welfare officer, Mr Cantillion bought the house in 1989 but it fell into severe disrepair and the council compulsorily acquired it in 2009. It has not paid Mr Cantillon for the house as he failed to lodge a formal claim for compensation within 12 months – a condition of which Mr Cantillon said he was unaware.

In 2003, Mr Cantillon drew up plans to build an extension to his house, and he also began hoarding items on the site. This led to complaints to the council about its appearance.

In May 2006,the council registered the site as “derelict” and valued it at €350,000. Dublin District Court ordered Mr Cantillon to pay a levy of €10,500 per year unless he cleared the site of all “rubbish”.
Cleared ‘rubbish’
He undertook to clear it, employing two gardeners and a waste-recycling company. The council, however, carried out a number of inspections through 2006 and 2007 and judged there had been no improvements. At the time Mr Cantillon was living between the cottage and his partner’s house.

Mr Cantillon says he found the experience “utterly overwhelming” and that he was making “strenuous efforts” to comply with the orders. He says he felt unable to cope and began to “withdraw from everything”. In March 2007 the council applied to An Bord Pleanála for consent to compulsorily acquire the site.

In October 2007 his solicitor, Eoghan McKenna, contacted the council objecting to its CPO plans on the grounds that Mr Cantillon was experiencing severe mental health difficulties. On August 6th, 2009 an order vesting the property in the possession of the council, a CPO, was signed by the assistant city manager, Michael Stubbs.

“I had given up by that stage,” says Mr Cantillon. “I decided to let it go with the bad luck and thought that at least I would get some money to buy a new place. But months went by and no cheque, so I got back in contact with my solicitor.”

Mr McKenna contacted the council in November 2010 seeking information. In January 2011 the council replied saying: “as no claim was lodged within the period of 12 months from the date of making the Vesting Order compensation is not payable to your client”.

The Vesting Order, seen by The Irish Times, makes no mention of a 12-month limit for seeking compensation.

All named defendants have delivered their defence and a date has yet to be set for trial. None of the defendants would comment when contacted by The Irish Times.