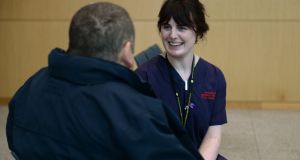 Jim Cleary says the appointment in January of homeless liaison nurse Jess Kenny at the Mater Hospital in Dublin “changed” his life.

Originally from Waterford, the 57-year-old has been homeless for over 19 years. He has severe asthma and was diagnosed with chronic obstructive pulmonary disease in 2007. He has been unable to work since, and without a home.

Though the hospital knew his situation, there was little staff had the resources to do beyond treating and discharging him with an outpatient care plan. Without a permanent address, a phone or regular access to email, however, he could not receive hospital correspondence and so attendance at outpatient appointments was erratic.

Housing has such a direct impact on your health. Homeless people are more likely to get ill

And though he was entitled to range of benefits such as a medical card, the Disability Allowance, eye-tests and free travel, he was not getting any – due, he says, to it being “too hard” to successfully apply for them, especially without a permanent address.

He now receives all of these following advocacy work by Ms Kenny and her colleague, social worker Rachel Kelly.

Ms Kenny explains her appointment was in response to the increasing number of patients who were homeless or in precarious housing, and to their often-complex health and social needs.

“There can be problems contacting the patients after for follow-up, or they might no longer be attending the GP they have listed.

“Housing has such a direct impact on your health. Homeless people are more likely to get ill and though they make up a small proportion of the general population, between 8 and 10 per cent of our patients are homeless.”

Her work is not only with those who self-identify as homeless but also with patients at risk of being discharged into homelessness, including older people, young care-leavers or non-nationals without family supports.

Mr Cleary says that despite being entitled to a medical card, travel pass and disability allowance, he has had none for a decade. “I applied and kept getting rejected. Jess and Rachel said we’d apply again. I had given up, was living by ducking and diving and the Vincent de Paul.

“But in February I got my medical card. They gave me a letter for the Department of Social Protection and I got the disability allowance. And they’ve helped me with Dublin City Council and applying for accommodation. And now I have the free travel too.”

Ms Kenny helped him get a low-cost laptop and phone, and he has been able to use the hospital social work department address for correspondence.

He is also engaging with Homeless First, which places long-term homeless adults straight into permanent housing with a range of supports.

In her role Ms Kenny can advocate for the “hundreds of Jims” in the hospital.

“The move in healthcare is to inclusive population care, to meet people where they are at instead of expecting them to adapt and fit around the system.

“It is where we have to go to improve outcomes for vulnerable populations. One size in healthcare definitely doesn’t fit all.”