‘I ask for the grace to weep,’ he tells Irish, British and German abuse survivors 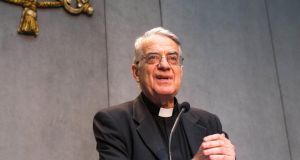 Pope Francis yesterday met with six clerical sex abuse survivors in a historic Vatican meeting, the first of this pontificate and one marked by the Argentinian pope’s now familiar compassionate ministry.

Pope Francis began the day by offering an apology to the six people – two Irish, two British and two German – during a homily at Mass in the Domus Santa Marta, his Vatican residence.

“The scene where Peter encounters Jesus after his terrible interrogation comes to mind . . . The eyes of Peter meet those of Jesus and he weeps . . . That scene comes to my mind as I look at you and think of so many men and women, boys and girls.

“I feel the gaze of Jesus and I ask for the grace to weep, the grace for the Church to weep and make reparation for her sons and daughters who betrayed their mission, who abused innocent persons.

“Before God and his people I express my sorrow for the sins and grave crimes of clerical sex abuse committed against you. And I humbly ask forgiveness . . . There is no place in the Church’s ministry for those who commit these abuses and I commit myself not to tolerate harm done to a minor by any individual, whether a cleric or not.

“All bishops must carry out their pastoral ministry with the utmost care in order to help foster the protection of minors, and they will be held accountable.”

Yesterday morning they and the eight members of the Vatican’s Commission For The Protection Of Minors, including Irish activist Marie Collins, attended mass at Santa Marta.

Following breakfast with the pope, all six survivors then had a one-on-one meeting with Francis during which they told their own individual stories.

In total the pope spent almost six hours of an intense morning with the survivors, prompting senior papal spokesman Fr Federico Lombardi to comment that the meetings had been distinguished by “the pope’s usual style . . . of pastoral listening” where the survivors felt they were being “heard, received and embraced”.

“This was not a superficial listening from the pope . . . He is someone who tries hard to listen . . . he has dedicated his entire life to pastoral listening . . . This was a spiritual and profound dialogue.”

Fr Lombardi also added that yesterday’s meeting was not so much concerned about “concrete measures” in relation to the handling of the clerical sex abuse as about a highly significant gesture of compassion and solidarity.

Yesterday’s meeting had been preceded by criticism from survivors’ lobbies in both Argentina and the US which had questioned the criteria used to pick the survivors.

The papal spokesman was asked whether, in the light of that criticism, yesterday’s meeting was not simply a PR move on the part of the Holy See.

Fr Lombardi vehemently rejected that suggestion, saying: “Time and again these lobbies fail to understand the real intentions of the pope and I am not surprised by their negative spin on this meeting.”