Responsibility needs to be taken for housing lists and homelessness, says President 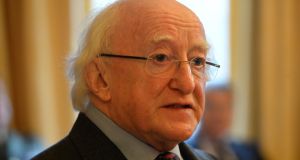 “Our planet is scarred by inequality, and inequality is growing, and the gaps are widening in what are described as some of the most prosperous parts of the world,” President Michael D Higgins has remarked. File photograph: Dara Mac Dónaill/The Irish Times

Those in positions of authority should apologise for not valuing social housing more in the past in light of the current housing crisis, President Michael D Higgins has said.

Speaking at the launch of Merchants Quay Ireland’s annual report on Friday, he said inequality continues to rise in Ireland, and that he “recoils” from headlines boasting the domestic economy is resurgent once more.

“Our planet is scarred by inequality, and inequality is growing, and the gaps are widening in what are described as some of the most prosperous parts of the world,” he remarked, referencing educational inequality in particular.

“I think it’s important to realise how inequalities are increasing in Ireland itself. I recoil a little bit from a headline that suggests ‘The economy roars back’ - well, the inequalities are roaring much louder in the world.

“It’s simply ridiculous to say that you’re living in a republic with republican values if you have children with different access to literacy itself, in relation to reading the schoolbooks and so forth.”

The President indicated that responsibility needs to be taken for a situation that has seen social housing waiting lists lengthening and people sleeping rough on the streets.

“I think it would be a great thing to hear from some authoritative body like the County and City Management Association: ‘We’re sorry we didn’t value social housing more’,” he said.

His address was given in the wake of a speech by Merchants Quay Ireland chief executive Tony Geoghegan, who revealed his “deep concern” for the welfare of homeless individuals ahead of the impending winter.

The organisation’s report stated that its drop-in service provided over 5,600 supportive interventions including referrals to emergency accommodation, and served nearly 80,000 meals last year.

“I think it’s fair to say that the homeless situation at the moment is just unprecedented - we certainly haven’t seen anything like it before and it is going to require an unprecedented response to do something about it,” Mr Geoghegan said.

“Looking into this winter, we are deeply concerned for the welfare of homeless people and what is going to happen, and I’m praying and hoping that it’s not going to take something as extreme as people dying on the streets, as it did last Christmas, before there is a response,” he added.

Talking to reporters after the launch ceremony, Mr Higgins cautioned against creating an artificial “war among the poors” between those struggling for basic services in Ireland and the 4,000 destitute refugees set to enter the State, in response to commentators who say the country should resolve its own domestic problems before welcoming a large influx of immigrants.

He continued: “Our future is a diverse society that plays to the best of our Irishness [...] these suggestions are that you must set the poor in contest with each other as some kind of ‘war among the poors’.

“It has always been something that is negative, and of course in many places in Europe it has led to xenophobia and in some places racism - so let’s just see it for what it is right at the beginning.”