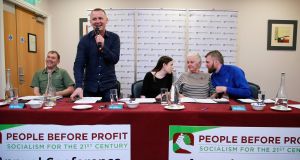 If the Green Party “wastes the huge surge in support” it received in May’s local elections by “propping up Fine Gael or Fianna Fáil” after a general election its voters would be left “very demoralised”, People Before Profit has warned.

Richard Boyd Barrett TD said voting pacts entered into by the Green Party with main establishment parties in Dublin local authorities did not “bode well”, but he added that People Before Profit looked forward to “friendly, robust debate” with the party’s activists in coming months.

The Dún Laoghaire Deputy was delivering a key address at the party’s annual general meeting in Dublin on Sunday, attended by about 200 delegates from across the island, including Belfast and Derry.

He said the issues Green Party voters wanted addressed, like the climate emergency and crises in housing, health and education, could not be tackled by working with the main establishment parties.

“They are the system. They are never going to instigate or support action to challenge the system that has created all these problems.”

Welcoming the “green surge” as “a big statement, particularly among young people, that they want radical action on climate”, he said the “big issue” was whether they would get it. If their vote was “wasted” on an alliance with either of the two main parties “that will demoralise people”.

“So we say to others on the left we want to work with...whether it’s Sinn Féin, the Social Democrats, the Greens or other groups, in building the climate strikes, the fights for affordable housing, for decent education, for decent health services . . . we appeal to you: do not use the increased support that you have got in recent elections or may get to then prop up the political parties that have caused these crises in the first place.”

He said Fine Gael’s attitude to the climate emergency was “almost Orwellian”. It paid “lip service” to the issues while “doing everything to actually block real and radical and tangible action”, and he cited Government’s move to block the Climate Emergency Measures Bill, sponsored by his party colleague Bríd Smith, with a “money message”.

He called for a “massive shift to public transport” with increased subsidies for public transport infrastructure and free public transport, a “major public works programme” of afforestation and the deep retrofitting and insulation of all local authority and public housing, grants to support people reduce their energy use, and agricultural diversification and supports for small farmers.

This would be paid for, he said, “by taxing those untaxed profits of the property speculators, the vulture funds and the big corporations who have been hovering up the profits of the recovery created by the struggle of ordinary working people”.

Fiona Ferguson, elected to Belfast City Council in April, said it was a “very exciting time” for the party in Northern Ireland, with five councillors newly elected.

“Some political organisations have pumped a lot of resources into trying to wipe us off the map politically...Not only did we survive, but we broke through in a big way in Belfast and in Derry,” she said.