Gardaí to be issued with list of Irish language phrases 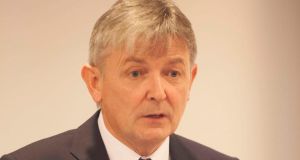 
Every garda will be issued with a laminated list of basic Irish phrases, following an incident in which a man stopped for a minor road traffic matter was arrested, handcuffed and detained at a Garda station until an officer with sufficient knowledge of Irish could be found to deal with him.

“Speaking Irish isn’t a crime, but this young man was treated as if it was,” said Irish language commissioner Seán Ó Cuirreáin in Galway yesterday when he outlined details of the incident, which occurred last year in Dublin.

New protocols have been agreed by Garda management in response to the investigation, as it has emerged that some gardaí who took Irish at school and studied it again at Templemore training college are unable to ask “Cad is ainm duit?”, said Mr Ó Cuirreáin.

Speaking at the publication of his annual report, Mr Ó Cuirreáin praised the reaction of the Garda Commissioner and senior management.

Gardaí have a statutory obligation under their Irish language scheme to respect the rights of any person trying to do their business in English or Irish, said Mr Ó Cuirreáin.

The Central Bank, Department of Justice and Equality, Health Service Executive and University of Limerick are among bodies and organisations subject to 13 inquiries by the language commissioner last year.

Traffic signs in English only and an absence of Civil Service staff competent to deal with the public in both official languages are among other issues highlighted in the report.

People who throw house parties can be fined €1,000 and jailed for up to a month under new proposals 20:47
Schools should not reopen after midterm unless safety improves, say unions 19:34
School ordered to reopen after closing due to Covid-19 fears 19:30
Rescue operation under way to prevent freighter hitting rocks 19:22
Brian Hayes says he considered resigning over Oireachtas golf dinner 19:21

1 One hundred Irish retailers for all your online Christmas shopping
2 People who throw house parties can be fined €1,000 and jailed for up to a month under new proposals
3 Thirteen further deaths and 1,269 new cases of Covid-19 recorded in the Republic
4 Extra day to Dáil debate on extending State’s powers during pandemic
5 School ordered to reopen after closing due to Covid-19 fears
Real news has value SUBSCRIBE