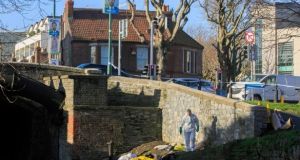 The incident is the subject of a Garda investigation, an investigation by the Health and Safety Authority and separate reviews by Waterways Ireland and the DRHE. Photograph: Gareth Chaney/Collins

Gardaí are appealing for witnesses to an “industrial accident” at the Grand Canal in Dublin on Tuesday in which a homeless man sustained serious injuries.

In the incident, which occurred between noon and 1 pm, the tent in which the man had been sleeping was “lifted” by a vehicle with a mechanical claw during a clean-up of the bank by Waterways Ireland.

In a statement gardaí said: “A male in his 30s received serious injuries in this incident and is currently in St Vincent’s Hospital where he is receiving treatment.

“Gardaí are appealing for anyone who may have witnessed this incident or any road users who may have camera footage to contact gardaí at Pearse Street on 01 666 9000, the Garda confidential line on 1800 666 111 or any Garda station.”

Waterways Ireland, which manages the canal, was removing up to 10 tents in the area at the time. An outreach worker from the Dublin Region Homeless Executive (DRHE) was present to assist people sleeping rough on how to access alternative accommodation.

Sources say the occupied tent was not opened but was checked verbally and that there was no response from inside. The worker operating the utility vehicle was then given the go-ahead to move it. When it was lifted, however, the tent began to move and was immediately returned to the ground.

The man inside was removed to hospital by ambulance.

The incident is now the subject of a Garda investigation, an investigation by the Health and Safety Authority, as it was a workplace incident, and separate reviews by Waterways Ireland and the DRHE.

While the DRHE provides homeless services across the four Dublin local authority areas, a spokeswoman said it had no remit to decide to clear tents or items from the canals. This was a matter solely for Waterways Ireland, she added.

In its statement Waterways Ireland said it had been working “in co-operation with the DRHE to remove tents along the canals in Dublin where they have become a public safety hazard”.

Separately a young homeless woman had died “tragically” in emergency accommodation in Dublin. Gardaí were called to the scene at a hostel in Dublin 8 at 5pm on Wednesday 15th. She was in her 20s and was in a six-month placement at the accommodation.

A spokeswoman said: “The DRHE, on behalf of the four Dublin local authorities, would like to express its condolences to the family and friends of the individual, who tragically passed away yesterday evening in a facility that provides 24 hour emergency accommodation to people experiencing homelessness. The gardaí and DRHE staff were in attendance.”