Gardaí must be 'more assertive' at large funerals – Traveller advocate 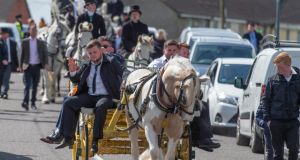 Mourners at the funeral of Michael and Johnny Cash on their way to Farranree Church, in Cork.

Gardaí must be “more assertive at dispersing people” when large numbers of mourners attend funerals, a leading Traveller advocate has warned.

Martin Collins, co-director of Pavee Point, said large funerals would continue, despite the HSE rules that they should not happen during the pandemic, as they had “huge cultural and emotional significance” for Travellers.

He was speaking as an extended Traveller family in Cork buried their fourth young man in less than a week.

The funerals, in Cork and Wexford, have drawn sharp criticism as each attracted more than 150 mourners. However, Traveller groups point out that Traveller family groups tend to be much larger than average ones.

On Monday, more than 100 people gathered outside Farranree church on Cork city’s northside for the funeral Mass of brothers Johnny (17) and Michael (41) Cash originally from the Fairhill area. Mourners followed the cortege to St Catherine’s Cemetery in Kilcully, where onlookers said social distancing was not observed.

Media reports suggested mourners had come from several counties and Britain. Local Independent councillor Ken O’Flynn said: “Most people are adhering to [the rules] despite the fact that they’re unable to attend loved ones’ [funerals].

“But where Travellers and their funerals are concerned, there appears to be one law for the general population and another for this specific ethnic group.”

In Offaly, local councillor John Leahy said he had been contacted by many constituents expressing their anger at the scenes there.

According to Government guidelines, during the crisis “funerals should be private and limited to a maximum of 10 people”.

Given that the HSE is now focusing on helping vulnerable groups, like Travellers, the Roma and people in direct provision, pressure is likely to grow on the Traveller community to do more to help themselves – especially by avoiding large gatherings like funerals.

Many at Monday’s funeral had travelled from Wexford where on Sunday the deceased men’s cousin, Paddy Cash (18), was buried. He had died with Johnny in a car crash in Boston on April 22nd. Michael Cash died earlier this month in his sleep.

The previous weekend dozens of the same mourners had gathered outside the same Cork church and travelled on to the same cemetery for the funeral of Cornelius “Connie” O’Donoghue (42) who had died the week before, also in his sleep. A separated father of three, he was related, by marriage, to the Cash family.

His sister and carer, Nora O’Donoghue, organised his funeral while also reeling from the news of her brothers-in-law’s deaths.

“As you can imagine, people were very low. Two young boys killed. Two other young men had died,” she says.

Undertakers, O’Connor’s, agreed that two people at a time could pay respects at the funeral home.

“That all went smoothly,” says Ms O’Donoghue. “The next day, what we said to the family was: ‘You can’t come into the church but you can pay your respects outside, socially distancing.’” The Mass was attended by Mr O’Donoghue’s mother, children and seven siblings.

Mourners were asked on social media to attend the graveyard only if they could socially distance. Though it “did get tight around the grave”, Ms O’Donoghue says households stayed apart from other families.

She points out Travellers’ households are often large. One of Connie’s sisters has three adult children with spouses and 15 grandchildren living in caravans in her back yard. “They are all living with each other. They aren’t going to socially distance,” says Ms O’Donoghue.

She stresses the shock and grief the family has been plunged into in the past three weeks but also the cultural significance of funerals to a “marginalised and isolated” community.

“It is part of solidarity with the community. It is instilled in you from a very young age, you have to go to funerals. You have to be there to stand with the family. These are the vital parts of our culture,” she says.

“So much of our culture has been pulled away – our nomadism, our economy. The effects of all that on our community are so detrimental. When your culture is under threat, you hold on to the things that you can. Always for us we have massive funerals. Honouring the dead is so important. There is a sense of loss if you don’t take part in the funeral.”

Mr Collins agrees, saying: “There are deep emotions around funerals, deeper than for christenings or weddings I’d say. There is a shame on you and your family if you aren’t seen at a family funeral.”

He has said in statements in recent weeks that during the Covid-19 pandemic this aspect of Traveller culture will have to “take a back seat” and large gatherings are “just not acceptable”. He reiterates this and adds gardaí should step in if necessary.

“It is not acceptable that social distancing is not being observed. But it is also unacceptable that the gardaí are standing back. They are well able to step in when they want to. There is scope for them to intervene, respectfully and politely, and to ask people to disperse.

“This is about saving lives – Traveller lives and settled people’s lives.”

A Garda spokeswoman said: “We have engaged extensively with Traveller community representative groups in relation to the public health guidelines.

“In supporting the guidelines, An Garda Síochána has adopted a graduated policing response based on its tradition of policing by consent. This has seen Gardaí engage, educate, encourage and, as a last resort, enforce.”