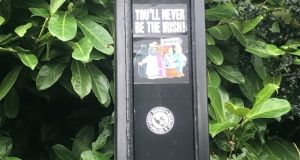 The stickers feature cartoon images of a group of migrants – including caricatures of Muslims, a man from Asia, a Roma woman and a person from Africa

Gardaí in Co Kerry are investigating after dozens of anti-immigrant stickers were stuck to electricity poles along a busy Killarney roadway.

The route along which the racially-themed stickers were placed leads to a number of hotels and guesthouses , in what is one of the State’s main tourist towns.

The manager in one of the hotels lodged the complaint with gardaí after being shocked to discover their placement in the early hours of Tuesday morning.

The high-gloss notebook-sized stickers feature cartoon images of a group of migrants – including caricatures of Muslims, a man from Asia, a Roma woman and a person from Africa with the heading “You’ll never be the Irish”.

The stickers also feature a signpost with the words “Convention Centre” which is seen as a reference to the fact that a number of citizenship ceremonies have taken place in Killarney in recent years.

Gearóid Murphy, deputy general manager of the Riverside Hotel, said the inflammatory stickers were pasted to poles along Muckross Road, which leads to several hotels as well as a major convention centre.

“We have a number of overseas staff in our hotel and this has really upset them. It is absolutely disgusting and disgraceful,” he said.

“Of all the towns in the country for this to happen in, you would think that Killarney would be the last given that we have so many overseas staff employed in the tourism sector and doing such a wonderful job.”

Mr Murphy said the stickers were discovered by staff arriving for work early on Tuesday morning and they were horrified and upset by what they saw.

He reported the matter to gardaí and to Kerry County Council and he is waiting to see what action will be taken.

“We went out and peeled off many of the stickers but there are still so many of them out there. It’s ignorant and it’s racist and whoever did this is just pure stupid,” the hotelier said.

A spokesman at Killarney Garda station confirmed the matter was being investigation and appealed to anybody with any information regarding the printing or erecting of the stickers to contact the local station on 064-6631222 or the Garda Confidential Line on 1800-666-111.