Gardaí called to over 27,000 domestic violence incidents during pandemic 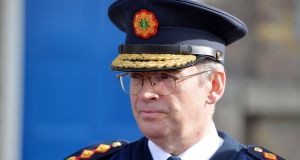 Garda Commissioner Drew Harris told a Women’s Aid online seminar there had been a 20 per cent increase in call outs to domestic violence incidents since the end of March. Photograph: Alan Betson/The Irish Times.

Gardaí have responded to more than 27,000 incidents of domestic violence since the start of the Covid-19 pandemic, a seminar has heard, with the number of applications for barring and protection order applications up by 17 per cent.

The figures were revealed at an online seminar hosted by Women’s Aid to mark the publication of its 2019 annual report. The charity also published a supplementary report, When Home is Not Safe, on the impact of the pandemic on women and children experiencing domestic abuse.

The supplementary report details a 71 per centincrease in visits to the Women’s Aid website between the end of March and end of June, from 67,187 to 114,576, and a 43 per cent increase in calls to its helpline, from 4,563 to 6,561, when compared with the same period last year.

Garda Commissioner Drew Harris told the seminar there had been a 20 per cent increase in call outs to domestic violence incidents since the end of March.

“There were some 27,174 incidents falling into the category of domestic abuse - a huge number and it’s a really significant policing issue for us,” he said. “We are very mindful that these are very vulnerable victims and we have a huge responsibility in terms of our response to them.”

The crime of coercive control, for which there has been one conviction so far, is a growing concern, he said, adding that a number of additional cases were before the courts and investigations were ongoing in 32 others.

Judge Colm Daly, president of the District Court, said there had been a 75 per cent increase in family law cases since 2014 including applications for protective reliefs from domestic violence.

“We saw a 17 per cent increase in cases during the lockdown,” he said.

Judge Daly said increase, relative to the number of extra contacts made to Women’s Aid, “reflects the fact that perhaps those most in need of protection were finding it difficult to find their way to court”.

He said a key lesson from the lockdown was the importance of keeping the courts “accessible”. He said the courts, not noted for their flexibility, would have to be open to changing the ways they conduct business.

Key to this would be the development of “remote courts” where cases were heard via video or conference link online. He said developing this would be a “top priority” for him at the start of the new legal term next month.

Niamh Ní Domhnaill, whose former boyfriend Magnus Meyer Hustveit was sentenced in 2016 to 15 months for raping her while she slept, said the first challenge for her in confronting the abuse was to recognise what was happening to her as “rape” and “violence”.

She was “still surprised” at the shame around the issues and said “we all” need to confront out biases about domestic violence.

Sarah Benson, chief executive of Women’s Aid, said such views “don’t come from nowhere” but were “absorbed socially and culturally [SO THAT]victims and survivors are inhibited from speaking the truth of their experience”.