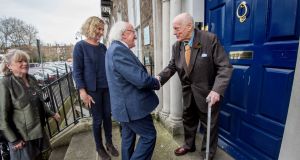 Film-maker George Morrison was honoured by President Michael D Higgins when he was bestowed the honour of Saoi of Aosdána during a reception at the Arts Council of Ireland. Photograph: Brenda Fitzsimons

Film-maker George Morrison received the highest honour in the Irish arts world on Thursday when President Michael D Higgins bestowed on him the title of Saoi of Aosdána.

Morrison (95) has made more than 20 films and produced some of Ireland’s most innovative and historically important documentaries.

His most celebrated films are his two feature-length historical documentaries, Mise Éire (1959) and Saoirse? (1961).

Not more than seven members of Aosdána may hold the honour of Saoi at any one time.

Making the presentation at the offices of the Arts Council in Dublin, Mr Higgins said the award recognised Morrison’s outstanding body of work that had made a deep and lasting impact on the cultural landscape of Ireland and elsewhere.

“As a film-maker of superb craft and skill, an archivist, a writer, a photographer and, above all, a great pioneer and innovator, George Morrison’s contribution to Irish art and cinema has been immeasurable,” said Mr Higgins.

“In a lifetime of dedication to the arts, he and his work have impacted enormously on how we, and future generations, will remember and by doing so ethically and inclusively come to understand our history and how that history has shaped the Ireland we inhabit today,” he said.

“George’s work has always been greatly inclusive, thus not only allowing us the opportunity to engage with the past, but enabling us to witness its unfolding. That is a great privilege, gifted to us by George’s creative passion, his constant will to push beyond the boundaries as he strives to envisage what might be possible,” he said.