Fáilte Isteach a way of welcoming migrants to Ireland through English

Awareness of cultural isolation a motivating factor for setting up classes 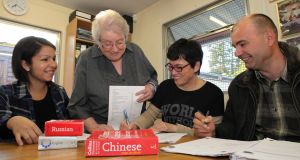 Hazel Refat was browsing through the local library in Portlaoise when a flyer on the notice-board caught her eye. A group called Fáilte Isteach was looking for volunteers to lead conversational English classes with recently arrived refugees in Co Laois.

Refat, who had recently returned to Ireland after nearly three decades teaching English across the Middle East, immediately added her name to the sign-up list.

Originally from Donegal and married to an Egyptian, Refat now volunteers every Wednesday at a local community centre in Portlaoise. Most of her students are from Eastern Europe, although she has also provided one-on-one English lessons for a newly arrived Syrian refugee who spent time in hospital due to ill-health.

“Most of these people don’t interact with Irish people on a daily basis because of the language barrier. They feel isolated and quite overwhelmed. They know they have to learn English because, otherwise, they’ll remain in their own communities. The classes give them the confidence to go out and connect with people.”

An awareness of the cultural isolation in her own community was the motivating factor for setting up Fáilte Isteach, says its founder Mary Nally. Nally established Fáilte Isteach in 2006 in response to the growing numbers of migrants and refugees beginning to arrive in Ireland.

“I was in the local supermarket one day and I could see a young mother who had two little children. It was evident she couldn’t read the package she had in her hand and I could see the frustration on her face. Immediately, I could see that this language barrier would lead to isolation.”

Nally is the founder of Third Age Ireland – a national voluntary organisation that offers programmes and support for older people across the State – and was already aware of the “wealth of talent, expertise and experience” that exists among Ireland’s older communities.

“The solution was our older people who have the time, the expertise and the willingness to help,” she says.

The first Fáilte Isteach class was held in Nally’s local community centre in Summerhill, Co Meath in 2006 and consisted of just 12 volunteer tutors and seven students. Ten years later, the tutoring programme, which is supported by State and philanthropic funding, has grown to 92 groups with over 900 volunteer tutors working with more than 3,000 migrant students in 24 counties across the State.

Ariana Ball, Manager of Fáilte Isteach, says the free classes are a means of promoting integration without identifying it as such. “We don’t over complicate it. We don’t say we’re here to break down barriers and promote integration. Yes we’re doing these things but without labelling it. We’re simply saying we know you have a skill you’d like to learn and we’re here to help.”

Ball says the classes also give Irish people a tangible means of responding to the refugee crisis. “At the end of last summer, when we were hearing so much in the media about the refugee crisis across Europe, we were overwhelmed by the amount of phone calls we got from people who wanted to do something. This was their way of getting involved and supporting what was happening.”

Nally believes the classes are beneficial to both groups involved. “It’s a win-win situation for both sides because we’re learning about the different cultures and backgrounds where people have come from. If you asked me ten years ago to tell you something about Moldova I could barely show you where it is on the map. Now I can tell you all about their culture.”

Séamus Moran, a semi-retired vet from Rathdowney, Co Laois, says he gets real satisfaction from seeing his students improve their English skills from week to week. Moran had encountered a large number of foreign nationals in the meat factory where he worked and was aware of their struggles with the English language.

“I had a bit of time on my hands for the first time in about 30 years so I started working with Fáilte Isteach branch in Portlaoise and then set up a branch in Rathdowney. There’s no doubt that there is a need for a service like this in most communities in Ireland because they all have non-nationals now with very little English who find every-day transactions like going to shops or the doctor difficult.”

Theresa Delahunty, the coordinator of the Fáilte Isteach programme in Kilkenny, says the flexibility of the programme caters to students of all levels. “When you’re got mixed levels of education you can’t lump all the students in together. We’ve had people who are medical doctors, people with PhDs and others with no formal education at all.”

“Many of them come for the social aspect of it,” says Delahunty. “They want to learn English but don’t want to be pressured with exams. There’s huge social dimension to the classes. People coming from places like Pakistan and Bangladesh may have been isolated in the community but these classes open up a new world to them.”

When Pavel Balog arrived in Ireland from the Czech Republic with his girlfriend four years ago, his English was extremely limited and he struggled to find employment. He found out about the Fáilte Isteach classes through a post on the citizens information website.

“For my own sense of pride I needed to improve my English,” says Balog who eventually found a job in a supermarket warehouse working alongside Irish and Polish men. “I wanted to be able to speak to my friends at work naturally and not stumble every two or three words.”

Balog, who now tutors English to beginners at the centre in Portlaoise, says the classes can only enhance integration if the students involved are motivated to learn and improve their language skills. “If someone wants to be part of their town, the classes are a good way of integrating. But if a student is introverted and lacks interest, they won’t help.”

As the number of refugees and migrants arriving on Irish shores gradually increases, older members of our society can play a vital role in welcoming people from different backgrounds, cultures and faiths, says Ball.

“The ageing sector is a growing sector. We’re living longer and while that is a positive thing, there are some challenges that come with that. But having an outlet and being valued as you grow older is so important and I think a project like Fáilte Isteach really recognises that.”

“This isn’t about big billboards telling us what we should think and how we should react. It’s about people having conversations, sharing their opinions and learning about each other. It’s not a one-way conversation, it’s a dialogue.”