Housing Finance Agency will invest another €150m in project to deliver 2,000 homes 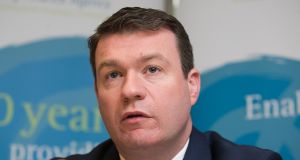 Minister for the Environment Alan Kelly said the new fund was in addition to enhanced funding for social housing announced in the budget and in the social housing strategy. Photograph: Gareth Chaney/Collins

Jonathan Taylor was speaking at the announcement of the bank’s first involvement in social housing in Ireland. He said delivery of social housing was a “key policy goal” for the bank across Europe.

The new programme will see the bank invest €150 million which will be matched by the Housing Finance Agency (HFA).

The money will go into a fund from which voluntary housing associations can borrow at preferential rates. The fund will be managed by the HFA.

“It is a model we have used successfully elsewhere,” said Mr Taylor. “Social housing is a key objective and key policy goal for the bank.”

“There are six [housing associations] in particular that have indicated an interest in these loan packages.

“I am very pleased to say we may be oversubscribed, and we may well be going back to Jonathan for additional funds...We will be making allocations of funding in the coming weeks.”

Michel Norris, chairman of the HFA, said while the amount of money was significant, perhaps even more significant was the involvement of the EIB.

The HFA’s credit committee will discuss its first application next Wednesday. It is from the Iveagh Trust, for €7 million, representing 70 per cent of the cost of refurbishing a derelict sheltered housing estate in Ballyfermot, formerly operated by Dublin City Council.

Gene Clayton, chief executive of the trust, said the project would deliver 70 one-bed apartments for older people and was “shovel ready”. If their loan application was approved next week work could begin at the end of May, and the new dwellings ready for tenants 18 months later.

Minister for the Environment Alan Kelly stressed the new fund was in addition to enhanced funding for social housing already announced in the budget and in the social housing strategy.

“We believe it is the start of a whole range of investment programmes that will come on board in relation to housing in Ireland, particularly in the conurbation around Dublin where there is acute demand.”

Minister of State for Housing Paudie Coffey said the investment by the EIB was “only a start”.

The Irish Council for Social Housing, which has over 270 members, welcomed the new programme.

1 Two hundred Irish retailers for all your online Christmas shopping
2 Father unaware partner and baby dead until gardaí called to raise alarm
3 Anatomy of a lockdown U-turn: Holding out against Nphet a gamble politicians unwilling to take
4 Man who loses bag with €40,000 of cocaine rings gardaí to report it missing
5 Dropping Covid-19 positivity rates give grounds for hope, says HSE boss
Real news has value SUBSCRIBE