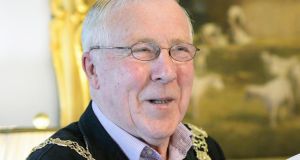 Lord Mayor of Dublin Christy Burke is hosting an event welcoming 28 young Dubliners with roots in different EU member states who will present their hopes for Dublin2020 in a “wishing tree ceremony”. Photograph: Eric Luke

Dublin’s bid to become the European capital of culture will get underway on Saturday.

Ireland and Croatia have been announced as the chosen countries for the European Capital of Culture 2020.

The city chosen from each of these countries is selected by the European Union and in the coming months the selection process will get underway.

Dublin is launching its bid to host the year long celebration by holding a number of cafe conversations and free events to discuss what matters most to the citizens.

The Lord Mayor of Dublin Christy Burke is hosting an event welcoming 28 young Dubliners with roots in different EU member states who will present their hopes for Dublin2020 in a “wishing tree ceremony”.

“I am thrilled to join these young visionaries on Europe Day and to officially launch Dublin2020, our bid to be European Capital of Culture in 2020. Dubliners are proud Europeans and these young people, who will all be young adults in 2020, are the city’s future,” said Mr Burke.

He said being a European capital of culture helps create economic growth, build a sense of community and regenerate cities.

Throughout May, Dublin2020 will host a number of Cafe Conversations, free events for the citizens of Dublin to discuss what matters to them.

They will take place at Croke Park on May 15th, Glasnevin Cemetery on May 21st, Freemason’s Hall on May 22nd, Le Peniche Canal Boat Restaurant on May 23rd and the RDS on May 28th

Archbishop pledges assistance to any inquiry into illegal adoptions 22:05
Garda chief lauds courage of officers at anti-lockdown protest 22:01
Biden ‘unequivocal’ about Belfast Agreement support as Dublin and London row over NI protocol 21:47
More than 40% of those on probation had mental health diagnosis, report shows 21:46
Sharp Dáil exchanges during debate on land agency Bill 21:22