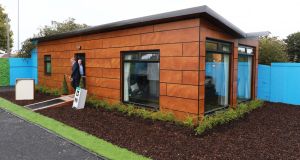 The provision of modular housing for homeless families faces significant delays following a decision of Dublin City Council to cancel the €20 million tender due to insufficient applications.

In October the council issued details of five sites around the city where 153 factory-built homes would be installed. The first 22 were to be delivered by Christmas using “ultra-accelerated procurement” at a site on Balbutcher Lane in Ballymun. The remaining 131 houses at sites in Finglas, Darndale, Cherry Orchard and Drimnagh were to be in place by June. Tenders worth €20 million were issued in December for the 131 houses on the other sites.

On Monday senior housing officials told councillors 131 of the houses would not be completed until the second week in December, but did not mention their intention to withdraw the tender the following day. Last December, days before they were due for completion, the council said the Ballymun homes would not be ready by Christmas, blaming protests at the site in November and bad weather. On Monday, councillors were told the 22 homes would be finished next week.