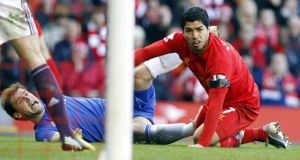 Luis Suárez (right) and Branislav Ivanovic on the ground after the Liverpool player bit his opponent during a Premier League match on Sunday. Photograph: Peter Byrne/PA

The decision of Liverpool football club to keep its star player Luis Suárez, despite his bizarre biting of Chelsea defender Branislav Ivanovic in a Premier League match on Sunday, has sparked renewed debate as to whether the extraordinary amounts of money swirling around the top echelons of modern soccer are corrupting the game.

While Liverpool manager Brendan Rodgers was quick to criticise the Uruguayan striker and to say no player was irreplaceable, the decision not to sell the club’s leading goalscorer appears to be in conflict with Rodgers’s claim that Liverpool is determined to hold on to its treasured “values and ethics”.

Suárez, who has been criticised by his sponsor, Adidas, and has been fined an undisclosed amount by his club, was given an eight-match ban last season for using racially-abusive language towards a Manchester United player, Patrice Evra. He may now face an even longer period on the sidelines.

In November 2010, he was given a seven-match ban by the Dutch Football Association and fined by his then club Ajax for biting Otman Bakkal of rival club PSV Eindhoven.

British prime minister David Cameron rowed into the Suárez row when his spokesman said it would be “very understandable” if the Football Association took into account “the fact that high-profile players are often role models” when deciding on the player’s punishment.

The trajectory taken by recent events at Sunderland has also made people wonder at the potentially malign influence of money on the world’s most popular game.

The appointment of Paolo Di Canio, an avowed admirer of the Italian dictator Benito Mussolini, as Sunderland’s new manager some weeks ago, caused a storm of controversy and prompted the resignation of the club’s vice chairman, the former British foreign secretary David Miliband. Di Canio, who has been fined in the past in Italy for making the fascist salute while on the pitch, has a tattoo on his back that includes the face of the dictator who was one of Hitler’s allies during World War II.

Unease at the controversial appointment did not last long, however. Just three matches into his tenure, Di Canio is now something of a hero having overseen Sunderland’s thrashing of local rivals Newcastle in his second game as manager and followed that with a win over Everton. The team is now six points clear of the Premier League relegation zone. In a year when the TV rights for showing matches in England’s top division are subject to a new three-year deal totalling £5.5 billion, relegation can lead to a club’s long term decline.

Factors such as these put Liverpool’s reaction to the Suárez bite in a particular context. That said, it is important to remember that Dublin GAA defender Kevin O’Brien is currently contesting an alleged biting offence against Donegal’s Paddy McBrearty during a league match on April 7th. Violence on the pitch is not confined to highly-paid soccer stars, as anyone who regularly attends GAA matches will aver. And a club’s tendancy to stand by a star player is likewise common outside the world of professional sport.

The argument goes that top-drawer soccer clubs are different, not least because of the role model issue referred to by Cameron’s spokesman. But there is a complicating factor here.

Yesterday, a leading member of the group set up to advise Fifa, the world governing body for association football, resigned saying she does not believe the it is taking seriously her committee’s work on combating corruption there. Alexandra Wrage, president of Trace International, an anti-bribery group, said she had formed the impression that Fifa president Sepp Blatter was not committed to serious reform.

That the organisation, which is based in Switzerland, is in need of serious reform is beyond doubt. Two years ago a BBC Panorama programme alleged there was a massive bribery operation running alongside the association’s role in assigning World Cup rights. Massive amounts of money was channelled through obscure companies in offshore locations such as Liechtenstein, the programme alleged.

The decision to have the 2022 World Cup take place in Qatar has been hugely controversial, because of allegations of corruption as well the obvious unsuitability of holding a summer contest in such a bakingly hot location.

Qatar is an absolute hereditary monarchy run by the same family since the 19th century. Human Rights Watch has expressed concern that the foreign workers who will build the new stadiums for the competition will work under conditions that have been characterised as near-feudal indentured labour.

Chelsea fans appear unfazed by the fact that their club is owned by a Russian oligarch who made his fortune during the wild west years that followed the collapse of the Soviet Union. Manchester City fans were delighted in 2008 when Sheik Mansour bin Zayed Al Nahyan took over, because they knew the money he had access to as a result of his family controlling Abu Dhabi would be used to buy world class players.

The United Arab Emirates, of which Abu Dhabi forms part, does not recognise the right to freedom of expression, human rights activists there are regularly harassed and imprisoned, its abysmal treatment of foreign workers (who make up 85 per cent of the population) has been widely documented, and its courts have upheld a husband’s right to “chastise” his wife and children with physical violence. But none of this served to dampen the delight of the Manchester City fans as they contemplated expensive new signings.

People shouldn’t bite people, but in a world where billionaire members of hereditary monarchies that have abysmal human rights records use soccer clubs as hobbies, there is something decidedly odd about using footballers’ follies as proxies for political debate.