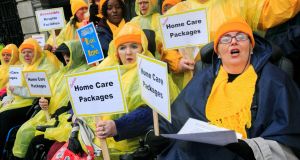 Dozens of protesters, including several people using wheelchairs, held a rally outside on Wednesday to demand more homecare packages and respite hours for people with disabilities.

The protest was organised by Fiona O’Reilly who was diagnosed with multiple sclerosis in 2013 and who has had to quit her job in retail.

“I was used to going out and working full-time, but I can’t work anymore. I am in the wheelchair full time about two years. What the Government offers is not enough,” said Ms O’Reilly.

“We were here in March 2017 and again in September that year to protest and call for ratification of the UN Convention for the Rights of Persons with Disabilities, which we achieved.

“Now, since its ratification we are still waiting for legislation to be enacted and here we are again today protesting for basic human rights.

“Firstly, we are looking for an improvement in home care packages. We want more hours. Some of us only get two to three hours per week and this is totally inadequate.

“The lack of staffing within the care companies means that we can be left waiting for the basic right of being able to get up out of bed on time in the morning and going to bed at night. There is no consistency with staffing or timing, and I myself had to fight for two years to obtain some of these basic rights.

“Secondly, increased availability of suitable respite facilities for those who need them. I have found through research I conducted that for many families respite care is their lifeline. Respite care facilities really must be fully accessible, with accessible parking on-site and within an hour’s drive of home.

“The people who need this care are surely among the most vulnerable in society and it is the moral responsibility of the State to look after its most vulnerable citizens in their time of need.”

She said it would make a “huge difference” if the Government allocated significant extra funds in the next budget.

Breda Gavagan who also attended the protest said many of those who needed access to additional services were people who suffered an acquired condition.

“Most of these people would have worked, paid their taxes, and then something happened, they got a degenerative condition such as MS or had a stroke or developed Parkinson’s. They are not on the books, they have to fight for every blessed thing.”