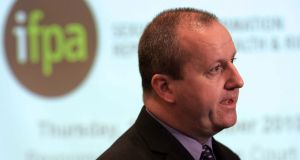 Niall Behan of the IFPA said the Irish health system was “turning its back” on people who needed care. Photograph: Eric Luke/The Irish Times

The death of a woman in London hours after she had had an abortion was the consequence of the Irish health system “turning its back on women who need care,” the chief executive of the Irish Family Planning Association has said.

Niall Behan was reacting to the news that a 32-year-old woman, who was a foreign national living in Ireland, had travelled to London for an abortion after she had sought one at a Dublin maternity hospital.

She had been told it was not legally possible here. She is understood to have had a condition which increased her risk of suffering a miscarriage, though the condition was not life-threatening.

She died in a taxi in London of a heart attack in January last year, having suffered large amount of blood loss during the procedure at a Marie Stopes clinic. She had been 20 weeks pregnant and had been living in Ireland with her partner. Both were resident in Ireland on student visas.

Mr Behan said the IFPA frequently had clients who experience difficulties raising the money to travel and to pay for an abortion and who had later-term abortions as a result.

“If they were resident in the UK and there was a serious health issue the abortion would be available to them, free of charge on the NHS.”

He said the case underlined the need for abortion legislation which protected the health and not just the life of a woman.

The National Women’s Council of Ireland too said the case “points to the needs for safe and legal abortion services in Ireland” and to the “artificial and unworkable distinction between a threat to the health and a threat to the life of the woman”.

“It also shows the devastating impact being forced to journey overseas has on women emotionally and physically,” said Jacqueline Healy, women’s health and human rights spokeswoman with the council said.

Referring to the fact the woman in this case had been at 20 weeks gestation she said it was apparent the couple had had to save up for the procedure.

“This is an abortion that should have been available as part of the national health service. It highlights the need for legislation which goes beyond the legislation now going through the Seanad.”

The Protection of Life During Pregnancy Bill is being debated in the Seanad. For the first time it sets out the circumstances in which abortion is legal in Ireland, where there is a threat to the life as distinct from the health of the pregnant woman.

A new campaigning group, ROSA, said the case underlined the need for accessible abortion services her.

The ROSA group (Reproductive rights against Oppression, Sexism and Austerity), was founded earlier this year.

Its spokeswoman, Socialist Party councillor Ruth Coppinger said though little was known about the details of the woman’s death, its circumstances, “highlight again the consequences of women being denied their right to make choices over their own bodies”.

Ms Coppinger said the woman’s death raised questions about the kind of care she received in London and the fact that women were being forced to leave the jurisdiction for abortion services.

Cora Sherlock of the Pro-Life Campaign said she could not comment until the full facts of the case were known but she described the woman’s death as a “complete tragedy” and said it highlighted how “dangerous and even fatal abortion can be for mother as well as baby”.