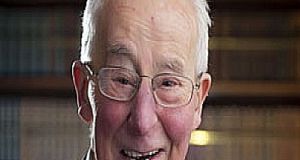 As an engineer, one of Thomas Hardiman’s proudest achievements was being elected a member of the Royal Irish Academy in 1980 for his services to science. Photograph: Courtesy RIA

He was engineer in charge at the inaugural Telefís Éireann (later RTÉ) broadcast from Dublin’s Gresham Hotel on New Year’s Eve 1961 and advanced through the organisation to become its first director general from within the organisation in 1968 at the age of 39. He succeeded Kevin McCourt.

His appointment coincided with the eruption of the Northern Ireland Troubles and growing tension between government and the national broadcaster over its news coverage.

In 1969 these pressures came to a head in an unrelated matter following an investigation by then current affairs programme Seven Days into moneylending in Dublin. The government established a tribunal following complaints from gardaí that they had been misrepresented. It found that the programme did not present enough evidence to support assertions that gardaí did not do enough to stop moneylending.

In 1971, concerned at RTÉ’s coverage of the Northern conflict the government issued a directive under section 31 of the Broadcasting Act banning it from transmitting anything that could be interpreted as promoting the aims or activities “of any organisation which engages in, promotes, encourages or advocates the attaining of any political objective by violent means”.

In 1972 this led to the government dismissing the RTÉ Authority following a radio report by journalist Kevin O’Kelly based on an interview with then IRA chief of staff Seán Mac Stiofáin.

O’Kelly was convicted in the courts on contempt charges and sentenced to three months imprisonment after refusing to identify Mac Stiofáin, who was charged with IRA membership. O’Kelly spent two nights in jail.

The new RTÉ Authority was expectedto sack Mr Hardiman. But he convinced it that to do so would be to sacrifice the independence of the national broadcaster.

Mr Hardiman was a keen supporter of the Irish language and it was during his tenure as director general that Radió Na Gaeltachta was set up in 1972.

When Mr Hardiman left RTÉ in 1975 he chaired the National Board for Science and Technology. And for that work the National University of Ireland awarded him an honorary doctorate in 1990.

He also served as president of the Confederation of Irish Industry, the Marketing Institute of Ireland, the Dublin Chamber of Commerce. He was also active on the National Planning Board and Telecommunications Review Group.

On an international level he fostered close relations between Ireland and Japan resulting in his being awarded the Japanese Order of the Rising Sun by the late emperor Hirohito in 1986, the second European to be so honoured. He chaired the Asia Europe Foundation and developed the Ireland Japan Association. This led to his accepting chairmanship of the Chester Beatty Library.

Mr Hardiman was also active in European affairs, being for a period president of the International Institute of Communications in London, a member of the Committee on the Elimination of Racial Discrimination, the EU advisory committee on research and development in Brussels, and chairman of the external relations committee of the Union of Industrial and Employers’ Confederations of Europe in Brussels.

As chairman of the Irish Institute for European Affairs in Louvain he oversaw the development of the institute on the site of the old Irish College there.

Born in Dublin’s Phibsborough on March 16th, 1929, he was the only boy and second youngest in a family of seven whose train driver father Patrick died at the age of 57 when Hardiman was four. Through scholarships he attended Coláiste Mhuire in Dublin and UCD, from which he graduated in engineering in 1951 and in mathematics in 1952.

As an engineer, one of his proudest achievements was being elected a member of the Royal Irish Academy in 1980 for his services to science.

In 1955 he married Rosaleen Thornton, who survives him, as do their three daughters, two sons and 12 grandchildren