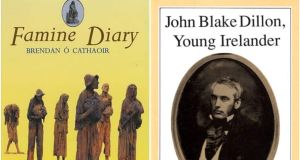 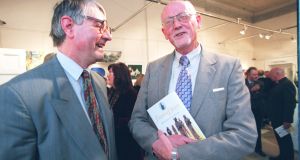 Brendan Ó Cathaoir with Martin Mansergh at an event to mark the publication of Famine Diary, in 1998. Photograph: Joe St Leger 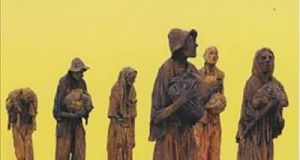 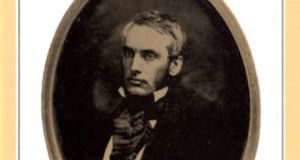 Tributes were lead by President Michael D Higgins, who extended his deepest condolences to Dr Ó Cathaoir’s family and friends.

“It is with great sadness that I learned of the death of Brendan Ó Cathaoir...Perhaps best known for his Famine Diaries published in the Irish Times to mark the 150th anniversary of the Great Famine, [he] had a special talent for bringing the voices of the past to life for a wide audience, with great eye for detail and accuracy.

“At a time that Ireland will commemorate the centenaries of some very difficult chapters in our history, Brendan Ó Cathaoir’s insights and analysis will be sorely missed.”

Originally from Co Clare but living in Bray, Co Wicklow, for many years, since Dr Ó Cathaoir retired from The Irish Times he continued to contribute occasionally to the Irishman’s Diary column, the Opinion pages and the letters page.

Where regular readers were concerned he was probably best known for his Famine Diary column, written weekly through 1995 to the end of 1997 as a commemoration of the 150th anniversary of the Great Famine.

The series was published as a collection by Irish Academic Press in 1998. At the launch in December of that year former special government adviser Dr Martin Mansergh praised Mr Ó Cathaoir as “the most courteous of scholars” and thanked him for “rescuing from fugitive newsprint the weekly columns he wrote and researched for Famine Diary”.

It was published by Currach Books last June. Mr Ó Cathaoir was too ill to attend the launch at Trinity College by lawyer and biographer Charles Lysaght, who described Mr Ó Cathaoir as sharing Elizabeth Dillon’s “Irish nationalist ideals and her devotional Catholicism; Mass in the (Trinity) College chapel was part of the many days he spent in the manuscript room reading and transcribing the diaries,” (as reported by journalist Liam Collins in the Sunday Independent).

Mr Ó Cathaoir will repose at Colliers Funeral Home, Old Connaught Avenue, Bray, from 2pm-4pm on Thursday. Removal to the Church of the Most Holy Redeemer, Main Street, Bray, will take place at 5pm.

His funeral will take place at 10am on Friday followed by burial in Kilnaboy Cemetery, Co Clare at 3pm.

1 Swedish expert backtracks on herd immunity for Ireland
2 Rising Covid-19 infections among older people ‘a grave concern’, NPHET warns
3 Miriam Lord: Micheál has Mary Lou pegged as a street angel and House devil
4 Sweden and coronavirus: how has the outlier of Europe fared?
5 Cult leader who claims to be reincarnation of Jesus is arrested in Russia
Real news has value SUBSCRIBE