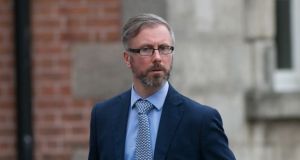 Minister for Children Roderic O’Gorman sought advice from the Attorney General over the deletion of the tapes. Photograph:Gareth Chaney/Collins

The Department of Children was involved in continuing discussions last night with the Commission into Mother and Baby Homes and the Attorney General in an effort to resolve the controversy over the erasure of all recordings of testimony given by survivors.

The Social Democrats have tabled a Dáil private members’ motion calling for the term of the commission to be extended for a further 12 months from its dissolution date at the end of this month.

The two main sponsors, Jennifer Whitmore and Holly Cairns, have argued that dissolving the Commission on February 28th will greatly impede any review of the decision to destroy the tapes to be carried out by the Data Protection Commission (DPC) or other relevant authorities.

In its report, the commission said it told witnesses who appeared before its confidential committee that a recording of their testimony would be destroyed to protect their anonymity but some survivors have since disputed this, saying the plan to destroy recordings was never communicated to them.

It emerged over the course of the weekend that back-up copies of the recordings might exist.

Minister for Children Roderic O’Gorman said that he would only know if all 549, or only some, of the recordings have been retained once the commission handed over all its records to him, as was required under the terms of its dissolution.

It is expected that the Government will oppose the Social Democrats motion. However, Government sources said last night that the counter-motion had still not been drafted as there were ongoing discussions with the Commission. The Minister was also awaiting advice from Attorney General Paul Gallagher.

The delay might signal that Mr O’Gorman might try to find a compromise with the Opposition. Criticism of the commission’s final report — including the decision to erase recording — has also been made by prominent Green Party colleagues of the Minister. They have not only criticised the findings but also the manner in which testimonies of survivors were summarised in the final report.

Over the weekend, Mr O’Gorman said an extension of the commission could hamper access to personal information for survivors. As of last night, he was still awaiting legal advice from Mr Gallagher on whether it was legally possible.

Mr O’Gorman also said if the commission continued in existence his department would not have the full archive and would not be able to deal with requests for personal information from survivors.

Ms Whitmore said the extension would allow the office of the DPC to carry out a full review of the circumstances surrounding the deletion of the recordings. “There are questions that need to be answered,” she said.

“The Social Democrats have written to the DPC to examine the issue. Survivors contest that the summaries were reflective of their testimony. There are disputes over the issue of consent and questions over the rationale behind what was done.”

Ms Cairns said Mr O’Gorman’s arguments about the archive did not make sense. She said that by simply making a full copy of the records, he could give one copy to the commission if its terms were extended, and retain a second copy in the department. That would overcome his concerns over extending the term of the commission, she said.