Thea Foster-Lee, who saved her mother from a knife attack, also recognised at awards

October 20th, 2017: Caitríona Lucas, a Coast Guard volunteer who died while participating in a search off the Clare coast in September 2016, has been awarded a posthumous gold medal and certificate of bravery at The National Bravery Awards. Video: Seán Dunne 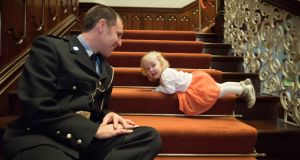 Garda Alan Hayes, who along with colleagues was awarded a bronze medal and certificate of bravery, pictured with his daughter Aibhlinn. Photograph: Barry Cronin

The son of Caitríona Lucas, the Irish Coast Guard volunteer who died when a rigid inflatable boat capsized off the Clare coast in September 2016, has said it was “humbling” for his mother to be awarded a posthumous gold medal and certificate of bravery.

The 41-year-old mother of two was honoured alongside 15 others in recognition of outstanding acts of bravery at the National Bravery Awards held in Farmleigh House, Dublin, on Friday.

Her son Ben said it was a “lovely honour” for his mother and the family felt great pride in the work she did.

“It’s sad in a way that it takes a tragedy such as my mother’s tragedy or the tragedy of Rescue 116 to bring to light the tremendous work that people do in a voluntary capacity and in their own free time. It’s a great recognition for my mother and everyone who does this work,” he added.

She was out with two colleagues searching for a missing man when their rigid inflatable rescue boat was hit by an unexpected wave, which caused the boat to flop over. She was taken unconscious from the water but repeated attempts to resuscitate her were unsuccessful.

Garda John Hennessy, who is based in Tipperary, was honoured for a second time for acts of bravery in the line of duty. He received a Bronze Medal and Certificate of Bravery for responding to a road traffic accident that trapped a woman inside her car, which had crashed into a tree near Clonmel in July 2012, the petrol tank catching fire.

“I’m delighted to be here,” says Garda Hayes. “It’s a great honour for me and my colleagues to get the medal. It’s something we did without even thinking, it’s second nature to us.”

Other recipients of bronze medals included Sean Baitson, Philip Byrne, Kyle Corrigan and Cody Ridge Grennelle for their brave efforts in trying to rescue a girl washed into the sea by a wave during a scouting trip to Co Wexford in December 2015. Philip Byrne managed to keep her afloat until a helicopter arrived. As she was being rescued she fell back into the water. She died on December 10th in Crumlin hospital, Dublin.

Darren McMahon, too, was awarded a certificate of bravery for saving the life of his older brother while on a kayaking trip near Ennis, Co Clare, in 2015. He was 13 at the time.

A bronze medal for bravery also went to John McDonnell, who jumped into the water near Ballyvaughan pier, Co Clare, in August 2016 to help Sgt John Casey rescue a man whose car went off the pier into the sea. Sgt Casey received a certificate of bravery.

Eoin Bolger, too, received a bronze medal for bravery for diving into water to rescue a man from a sinking car in Graiguenamanagh, Co Kilkenny, in November 2016.

And Thea Foster-Lee, the daughter of a woman who was being attacked by a man with a kitchen knife in Cobh in August 2015, was also recognised for her bravery. She received a bronze medal for throwing herself between the attacker and her mother, and in doing so received a serious hand injury. Her mother recovered and the attacker got a nine-year jail sentence.

Mark O’Hara got a bronze medal also for helping to extinguish a fire at a petrol station in Manorhamilton, Co Leitrim, in July 2016. He had noticed a girl filling her car on the forecourt when suddenly the nozzle and petrol tank caught fire.

Congratulating the recipients, Ceann Comhairle Seán Ó Fearghail noted that the Bravery Awards are the only such awards given by the Irish State to its citizens. “It is fitting that these courageous acts of bravery are acknowledged and celebrated,” he said.