CCTV needed in all creches, say parents in wake of exposé

Creches using CCTV must be clear when and how footage is destroyed, says rights body 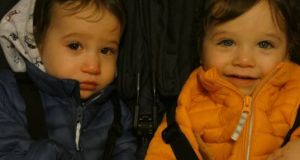 CCTV cameras should be installed in all childcare facilities to ensure children are cared for in a safe and loving environment, the parents of two children who attended the Hyde & Seek creche on Tolka Road in Dublin have said.

Liron Yitshak Aikalay, whose son appeared in last week’s RTÉ exposé of the creche chain, said Tusla – The Child and Family Agency, should carry out “pop-up inspections” and contact parents immediately if they discover a breach of care at any centre.

The undercover investigation revealed a pattern of disturbing behaviour and practices in the Hyde & Seek chain, including fire-safety breaches and rough handling of children.

Liron and her partner, Moran Yitshak Aikalay, who moved to Ireland from Israel last November for work, withdrew their twins from the Drumcondra creche after being contacted by a journalist ahead of the broadcast. They were shown footage of their son Shane being handled roughly and pushed down into his cot.

Moran remembers fighting the urge to scream when she saw her son on screen. “I started crying and cursed her in Hebrew. I was so angry but at the same time I felt so powerless.”

Liron said what was broadcast was “every parent’s worst nightmare”.

“Watching it was indescribable. It felt like the whole world was collapsing. It’s been tough. We have no family here and are alone. We had to find a new creche as soon as possible.”

The 18-month-old boys, Shane and Ray, had been attending the creche for eight months – initially on a full-time basis before transferring to part time when the cost became too high.

After viewing the video, Liron immediately sent a text message to the manager of the creche, Anne Davy, withdrawing her sons. She and Moran met Ms Davy before the documentary was broadcast and received a refund for the month of July along with their deposit. They have not spoken to Ms Davy since.

Moran said she would like to see Ms Davy take responsibility for what reportedly took place at the creche but that it is too late for an apology.

“The damage is already done but I do want her to say what she did was wrong. I don’t need her apology; it won’t do any good to my kids.”

Liron is calling on Tusla to carry out a full investigation into the findings of the report but also to conduct more unannounced inspections of childcare centres. She would like to see CCTV in all Irish creches so parents can check on their children.

“Maybe one day [the twins] will forget but we won’t,” Liron said. “But we do want Shane and Ray to understand what happened. I want them to know that they helped change the lives of other kids and parents.”

CCTV cameras are already used in some Irish creches, which protect footage through rotating passwords. Guidelines laid out by the Data Protection Commission state that an organisation must be able to justify why CCTV is necessary and recommend that consent is given by individuals, in this case the parents of children, before filming commences.

Footage is usually retained for no longer than 30 days. Creches must be totally transparent about their use of CCTV and how long the data is retained while parents are entitled to request copies of the footage.

Tanya Ward, chief executive of the Children’s Rights Alliance, said any creche using recording facilities must make it clear to parents how and when footage will be destroyed.

Although a number of childcare facilities already use cameras, she said some parents may feel uncomfortable capturing their children’s movements on film.

A broad educational programme is needed to ensure parents understand they can file unsolicited reports to Tusla if they spot worrying childcare practices, said Ms Ward, adding that five centres nationwide had been shut down in the past year following such reports.