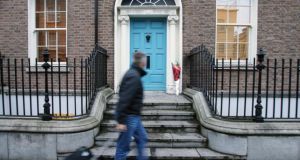 A man walks past flowers left near Leinster House in Dublin, where a man was found dead this morning. Photograph: Niall Carson/PA Wire

Homeless groups have warned of grave risks facing rough sleepers following the death of a homeless man a short distance from Leinster House in Dublin.

The 43-year-old man was found in a doorway on Molesworth Street during the morning rush-hour yesterday. A doctor was called and the man was pronounced dead at the scene.

A postmortem was carried out but the cause of the man’s death was not formally established last night.

More than 160 people are sleeping rough on the streets of the capital on a nightly basis, according to latest official figures compiled last month.

This is a 20 per cent rise on the same period last year and a 180 per cent increase since November 2009.

Dublin’s Lord Mayor Christy Burke described the circumstances of the man’s death as a “national disgrace”, while homeless groups said the risks facing vulnerable people will only increase as winter sets in.

He said while agencies do their best to help, it was likely “that as winter is coming in we are going to have more deaths”.

Pat Doyle, chief executive of the Peter McVerry Trust, said the death was a tragedy that must not be allowed to happen again.

“There are no acceptable reasons or justifications why any person should need to sleep rough in Ireland. as a society we need to do much more to prevent and eliminate homelessness in all its forms,” he said.

Some political parties described the news as a troubling wake-up call for policymakers, but others went further and drew a link between Government policies and the man’s death.

Barry Cowen, Fianna Fáil’s environment spokesman, said the fact that the death occurred so close to the Dáil was a reminder of the scale of the homelessness problem.

“As TDs, senators and staff walked into work this morning, they were faced with a very real example of just how bad the problem has become in Dublin and in other cities across Ireland,” he said.

Dessie Ellis, Sinn Féin’s housing spokesman, said there was a grim irony that the death should occur so close to the building where policies were rubber-stamped that ended up failing vulnerable people.