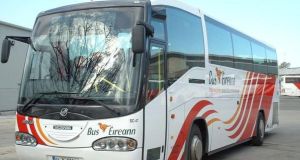 Bus passengers are set to be hit with a strike

Members of the largest union at Bus Éireann are set to go on strike this Sunday after rejecting planned cost-saving measures at the company.

The National Bus and Rail Union (NBRU) balloted its members this afternoon on cuts recommended by the Labour Court. The measures, which were are due to take effect on Sunday, were rejected by 681 votes to 139.

The union represents about 1,100 of the company’s 2,500 workers. Its secretary general Michael Faherty said the high turnout of voters “indicates how seriously people are taking this.”

Bus Éireann, which lost some €6 million last year, intends to cut payroll costs by €5 million. The company says the cuts are necessary to ensure its viability and protect 2,500 jobs.

The result of the ballot means strike action is inevitable unless something “unforseen” happens inthe meantime.

“The people who have voted against the Labour Court recommendation were well aware of the consequences, on the ballot paper it was stated very very clearly that a rejection would mean all out strike action,” Mr Faherty said.

This morning Bus Éireann spokesman Andrew McLindon said any industrial action would be counterproductive. “All it will do is increase our losses, reduce our revenues, be highly inconvenient for our customers,” he told RTÉ’s Morning Ireland.

Mr McLindon said the company had “exhausted the State’s industrial relations mechanisms” and would be going ahead with the Labour Court recommendations.

He added that unions were legally obliged to give the company seven days’ notice prior to industrial action and that any action initiated this Sunday would be considered unofficial.

However, speaking to the Irish Times this afternoon, Mr Faherty said the union had written to the company on May 1st indicating its intention to proceed with industrial action if cuts were made.

In a statement released today Bus Éireann said it would try to keep as many services as possible operating “as long as it is safe to do so” and will keep customers informed of any disruptions caused by industrial action.