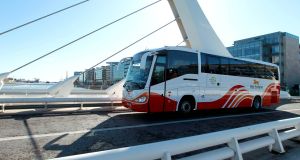 Bus Éireann is to unilaterally implement cost-saving actions from Monday, February 20th, in a move which is likely to lead to industrial action in the company.

The prospect of serious industrial action at Bus Éireann and potentially elsewhere in the State transport sector has increased significantly after management at the State-owned company announced it would unilaterally introduce a series of highly controversial cuts to staff earnings from February 20th.

Trade unions representing staff at Bus Éireann said they were fully prepared “to engage in a battle” over the move which management argued was necessary to stave off potential insolvency.

Acting chief executive Ray Hernan told employees on Friday that the proposed changes to terms and conditions would result in reductions in earnings of approximately 10 per cent after a proposed 2 per cent pay rise was taken into account.

He said the company was facing a critical financial crisis with projected losses of up to€9 million for 2016. He said it would be irresponsible of management not to take remedial action.

He said any industrial action by staff over the planned new measures would worsen the company’s financial position and would mean that even greater savings would have to be found.

The group of trade unions at the company said the move by management represented “an atrocious attack on bus workers” and pledged to fight to protect their members and the critical public services they provided. Unions have contended that proposed cuts could see workers’ earnings fall by up to 30 per cent.

In his letter, Mr Hernan said that from February 20th next:

* Rota and shift premium payments will be abolished.

* Overtime rates will be reduced to time and a quarter and double time for public holidays.

*A general reduction in allowances of 10 per cent across all grades will be put in place.

* Sick pay benefits will be based on basic salary only.

Mr Hernan said the company would be introducing from the same date “a new, more flexible method for covering core drivers”.

“This may include the employment of part time and casual staff to deliver the most efficient and responsive needs of our customer timetables and service delivery. The highest standards of training and safety will be applied in all cases.”

Responding, the five trade unions - the NBRU, Siptu, Unite, TSSA and TEEU - said: “Threatening workers with horrendous pay cuts and exposing commuters to unnecessary travel chaos is no way to run a public transport system for the citizens of this State, and it is a sad indictment of both policymakers and those in Government who, it seems, are acting as cheerleaders for this disgraceful attack on working people, their families and the travelling public.”

On Thursday, trade unions representing the 2,600 staff at the company said they would engage in industrial action if management moved to implement controversial cost-saving plans without agreement.

The nature of any industrial action has not been specified at this stage.

However, while some unions have indicated that any industrial action could spread beyond Bus Éireann to other companies in the State transport sector such as Dublin Bus and Iarnród Éireann, they have also signalled that they would be conscious of the implications of any strikes on people in rural Ireland who rely significantly on Bus Éireann services.

Minister for Transport Shane Ross again said on Friday he could not become involved and that it was up to unions and management to seek to find a resolution to the company’s financial difficulties.

Unions will now watch carefully to see if there will be any shift in the Government’s position in advance of a Dáil motion to be tabled by Fianna Fáil next week which, among other points, calls for any restructuring plans at the company to be agreed with staff and not imposed.

Given the Dáil arithmetic, it is possible the Government could be defeated on the motion.

Mr Hernan said he was extremely disappointed the trade unions had refused to meet management directly on its controversial survival plan.

“I believe the trade unions are risking the future employment of the staff and our company, and need to act responsibly.

“This failure to engage now leaves management with no other option but to proceed with the necessary changes to safeguard Bus Éireann, in the best interests of our customers, staff and stakeholders.

“Both management and our board of directors recognise the seriousness of the situation facing the company and are determined to take whatever actions are appropriate and necessary to secure the long-term future for this company and by doing so, protecting the maximum number of viable jobs.”

Mr Hernan said a review of all structures in Bus Éireann which was under way would be completed by the end of March.

“To minimise the impact on payroll, I am targeting the maximum number of savings on non-payroll items and my management team are currently re-drafting budgets on a zero-cost basis.

The effect of changes on average earnings will be approx 10 per cent after an average 2 per cent increase offered on basic pay.”