Up to 80,000 passengers could be affected as no indication of talks to settle row 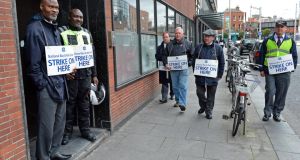 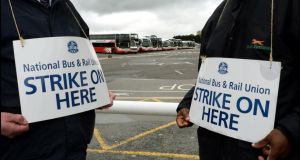 Bus drivers on the picket line at Broadstone station in Dublin during the National Bus and Rail Union industrial action. Photograph: Brenda Fitzsimons

Between 70,000 and 80,000 Bus Éireann travellers face disruption tomorrow as a strike by members of the National Bus and Rail Union (NBRU) seems set to enter a second day.

The dispute is over moves by management to unilaterally implement a Labour Court recommendation aimed at generating savings of €5 million in the loss-making State-owned transport company.

The Government today urged the union to engage in talks with management.

Minister of State at the Department of Transport Alan Kelly suggested the Labour Relations Commission could become involved again in the dispute.

However, unions and management at the company have said there has been no third-party intervention.

About 95 per cent of Bus Éireann services did not operate today after pickets were placed on depots by members of the NBRU.

Bus Éireann has more than 2,000 staff, about half of whom belong to the NBRU. Others who are members of Siptu and the Transport Salaries Staff Association did not pass the pickets.

Siptu president Jack O’Connor indicated members of his union were likely to vote in favour of industrial action when a ballot concluded later this week.

A spokesman for the company said if the same level of disruption takes place tomorrow between 70,000 and 80,0000 people would be affected.

Bus Éireann said it expected its school bus services would operate normally tomorrow. However, it added that about 2,000 children with school transport tickets who travel on its regular services could be affected if these are hit by the strike.

“We must all work together to save Bus Éireann services and jobs. There is no time to lose.”

Tánaiste Eamon Gilmore said the strike was not good for the travelling public who were inconvenienced by it.

“It is not good for the company which is already in financial difficulties and of course it is not good for the employees who are losing money as a consequence of the strike,” he said. “All strikes, all disputes, are ultimately resolved in discussion and negotiation and the sooner that that happens, the better.”

Spill over
General secretary of the NBRU Michael Faherty again warned that the dispute at Bus Éireann could spill over into Dublin Bus and Iaranród Éireann – also part of the wider CIÉ group – if it continued for a number of days.

He said that three years ago staff had reached a deal with management which yielded savings of €30 million, including €15 million in payroll costs. However, he said immediately following this move the government had cut its subvention to the company by 25 per cent. He said members feared this would happen again if they conceded on further payroll savings.

Mr Faherty said Bus Éireann had more than €60 million in funding tied up in the overall CIÉ accounts.

He suggested some of this could be used to tackle the financial difficulties being faced by the company.

However, a Bus Éireann spokesman said it was a “fantasy” to suggest that there was a crock of gold that could be used.

He said this money formed part of the company’s financial reserves to deal with future compensation claims.