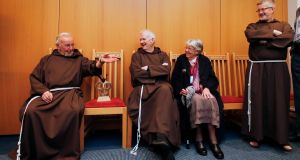 The Government’s evident inability to get to grips with the housing crisis came in for strong criticism inside Leinster House on Thursday from Br Kevin Crowley, founder and chief driving force behind the Capuchin Day Centre in Dublin.

Speaking in the members’ restaurant after becoming the fourth recipient of the Oireachtas Human Dignity Award, the sprightly friar took aim at those close by.

“It’s absolutely appalling,” he said, “to think in 2018 that the Government cannot face up to the fact that we have a crisis in our country.

He questioned the State’s strategy in addressing the crisis. “Where are we? Where are our politicians? Where is the money going to? Recently, there was a hotel got, I think, €9 million for homeless people. How many houses could we have built for that? It is a crying shame.”

The centre on Arran Quay started by catering for some 50 people a day when Br Crowley founded it in 1969. Back then the scourge of the homeless and street life poverty was drink, whereas today it is drugs, Br Crowley said .

“But most importantly again, what annoys me is that those people go to hotels in the evening time with food that they take from the day centre.”

The award was presented by the Ceann Comhairle, Seán Ó Fearghaíl, who said the fact the centre provided for a continuing need said “more about us” than it did of the work being done.

He wondered when homes became “housing units” and when society had been replaced by “an economy”.

“We have to admit that we have made serious mistakes,” said Mr Ó Fearghaíl, “that we have allowed local government to absolve itself of its central role in the provision of social housing across this country, something it did hugely successfully when the country had very little money and was in fact a poor country.

He said “a torturous and self-serving bureaucracy” had grown up around housing delivery, making it incapable of resolving this problem. Until the delivery system was tackled, it would not be resolved no matter how much money was spent on it, he said.

“That’s why Br Kevin is such an inspiration to us, because he forces us to look at what we are doing by the example that he gives.”

The award was given by the Oireachtas Human Dignity Group, whose founding member, Senator Rónán Mullen (Ind), said Br Crowley had “earned the respect of the Irish people”.