Boston College says it will return interviews about the North

Archive of interviews with paramilitaries linked to arrest of Gerry Adams 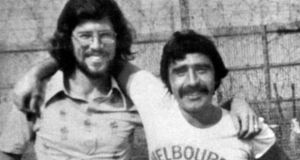 Boston College in the US is to hand back the tapes which formed part of its Belfast Project to those interviewed for it. The decision follows the arrest and detention of Sinn Fein President Gerry Adams by the PSNI last week, believed to have arisen because of the content of some such tapes.

On Monday the College’s history department disowned the Belfast Project saying it, “is not and never was a Boston College History Department project”. It did so in an open letter signed by each of the five professors and chairs of the history department at the college since 1997.

Gerry Adams has welcomed the College’s decision to hand back the tapes. “The Boston College Belfast Project was flawed from the beginning.” he said yesterday. “It was conceived by Lord Paul Bew, ” he said. He proposed Ed Moloney and Anthony McIntyre despite the fact that both individuals were “extremely hostile” me and Sinn Fein, Mr Adams said.

Mr Adams was “not and am not aware of any republican or member of Sinn Fein in support of the peace process who were approached by Anthony McIntyre to be interviewed. On the contrary, the individuals so far revealed as having participated are all hostile to Sinn Fein.”

This “flawed project was exposed when Ed Moloney chose to capitalise on the death of Brendan Hughes and write a book called, Voices From The Grave’ . No republicans, including myself, who were slandered in that book were offered the opportunity before publication to rebut the allegations made against them. Ed Moloney needs to explain that decision.”

He also said Mr Moloney needed to explain why, after the project officially closed, he returned to Ireland in 2011 and asked Dolours Price to be interviewed on DVD, recordings which he then lodged in the archive. “It is that interview, Anthony McIntyre’s interview with the late Brendan Hughes and his interview with Ivor Bell, which formed the mainstay for my arrest last week.”

In a lengthy statement on his blog yesterday Mr Moloney described claims that the Belfast Project was “an enterprise designed to embarrass and discomfort Mr Adams” as “a slur on my professional integrity as a journalist of over 30 years standing who has covered nearly every aspect and participant in the Troubles.” It was “a slur on the professionalism and detachment with which I know the lead IRA researcher Dr Anthony McIntyre approached his work interviewing the participants.”

He said “ There were over 200 interviews from 26 participants housed in the Boston College archive and Mr Adams has not read them.” He “does not know their full content and aside from two or three names that are in the public domain, does not know who was interviewed.”

He pointed out that apart from himself and Dr McIntyre, only one other person had read the full archive. “That was Judge William Young who presided over the first hearing dealing with Boston College’s attempt to get the British subpoenas dismissed at the Federal District Court in Boston in December-January 2011/2012.This is what he said about the archive: ‘This was a bona fide academic exercise of considerable intellectual merit’.”

Judge Young “could find only one interview that was fully responsive, i.e. that dealt directly with what had allegedly happened to Jean McConville.....Another 10 or so interviews made some reference to her” which amounted to “just under six per cent of the interviews reviewed by the judge.”

Mr Moloney concluded:“If this was indeed a ‘Get Gerry Adams’ project then all I can say is that we did not do a very good job of it.”