Bert and Ernie’s romance offers a lesson in tolerance

Opinion: Reporting the Christian bakery sends the message that it is not okay to disagree 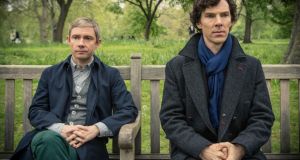 Martin Freeman and Benedict Cumberbatch as Watson and Holmes: sharing a flat but not a bed

Curious thing, the decline of male friendship. In the wildly popular BBC series Sherlock, which stars Benedict Cumberbatch and Martin Freeman, the characters have to spend substantial time clarifying that they are not lovers.

It seems increasingly difficult for a modern audience to conceive that two men could share a flat without also sharing a bed.

The creators of the series, Stephen Moffat and Mark Gatiss (the latter is a gay man) have explained that they wanted male friendship to be at the heart of the story. Moffatt believes that Arthur Conan Doyle’s original stories contain “the fondest friendship in fiction and a sort of exaggerated, daft portrait of what a male friendship of many years looks like and behaves like”.

In the BBC series, Sherlock happily claims the title of high-functioning sociopath, while John Watson is the essence of dogged, loyal decency and courage. Yet they are good for each other. Sherlock pulls Watson out of depression at the beginning of the series, and as a result of their friendship Sherlock begins to develop traces of empathy.

They are an odd couple, as in Neil Simon’s 1960s play The Odd Couple, which is about two divorced men sharing an apartment. The pathologically tidy and critical Felix and the slovenly but good- natured Oscar drive each other mad, yet manage to maintain an exasperated affection for each other.

They were designed to show pre-schoolers that it is possible to be friends with people who are very different to you. But that was before the era of “shipping”, that is, speculating on romantic relationships between fictional characters.

Shipping knows no boundaries. Aside from the obvious straight and gay combinations, the website TV Tropes wryly lists examples of “ships” between people still in grade school; siblings; twins; and inanimate objects.

I suppose we should be thankful that Ernie and Bert are shipped with each other, and not say, with the pigeons. But isn’t it sad that they can’t just be friends?

As Vanessa Vitiello Urquhart, a freelance writer who draws the online comic Tiny Butch Adventures, says in another context in a blog on Slate.com: “Why has friendship become so devalued – and whoever said that true intimacy could only be found in the context of a romantic relationship, anyway?”

Sure, there are lots of “bromances” depicted in movies, but far fewer everyday, sustaining friendships.

In a doctoral thesis, Lorna Sweeney explored the situation of young men who had experienced a friend dying by suicide. She concluded that even when they grow up in an open, liberal and prosperous society, young men have very little confidence in their ability to communicate at any deep level. Emotional sharing usually took place in the context of alcohol, and so could be dismissed as “the drink talking” the next day. Even when disclosures about wanting to die by suicide were made, they were also written off, sometimes with tragic outcomes.

Currently there is a controversy about a Northern Irish bakery, Ashers Baking Company in Belfast, that politely declined to produce a cake promoting gay marriage that featured a picture of Ernie and Bert. This was not a cake baked for a civil partnership celebration. This was an exercise in sloganeering. If it were a bakery run by people who are pro-choice, would they have the right to refuse someone who wanted a cake depicting a child in the womb, with the slogan “It’s a child, not a choice”? I believe they would.

Ashers is run by Christians, who did not object to the sexual orientation of the person ordering the cake, but only to the political slogans and images. The right to practise a religion is a fundamental human right, as fundamental as the right to be free from discrimination on grounds of sexual orientation. The most difficult situations to resolve involve a clash of rights.

Yet there is something very Marie Antoinette about a right to eat cake, especially when another bakery happily accepted the order. Why was Ashers reported to the Equality Authority, and threatened with legal action? Given that gay marriage is currently illegal in Northern Ireland, how can there be any grounds for claiming discrimination?

Reporting the bakery sends the message that it is not okay to disagree, only to capitulate. If legislation for gay marriage is passed, are we to expect more of this kind of behaviour, more targeting of businesses and even attempts to put them out of business? Are we to expect more demands for tolerance from people who exhibit little tolerance in their turn?

It is both sad and ironic that the cake featured an image of the two Muppets pals. It is sad, because it means that even children’s programmes are fair game in the culture wars. It is ironic, because the real message of Ernie and Bert is about learning to get along with people, even when they are very different to you.