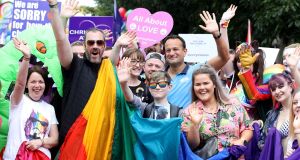 Belfast’s LGBTQ Pride parade is being held online this year with a virtual celebration instead of the usual colourful street parade.

The city’s 30th LGBTQ celebration was postponed due to the pandemic and an online event has been organised on Saturday instead on Facebook.

Last year’s parade was the biggest to date with more than 50,000 people taking to the streets.

For 2020, the organisers have asked people to send in a short video instead about how they are celebrating.

Parade hosts Trudy Scrumptious and Gareth Woods began a four-hour live show at 1pm featuring the best of the videos sent in.

From 7pm, an online Party In The Square will take place featuring music and talent from Northern Ireland’s LGBTQ community.

Public Health Agency spokeswoman Fiona Teague said Pride is an opportunity to highlight and celebrate the organisations working to support the health and wellbeing of the LGBTQ community.

“Due to the Covid-19 restrictions we, like so many other supporters, are unable to take part as usual in the Pride parade.

“We want to send a message of support to the LGBTQ+ community and let them know there are support services available for their needs, and to not struggle on their own with whatever they are going through.

“Research has shown that overall, members of the lesbian, gay, bisexual and/or transgender community are more likely to experience depression, anxiety, low self-esteem and other mental health issues due to discrimination and social isolation.”

Alliance Party leader Naomi Long said Pride was a chance to reflect on positive changes for the LGBTQ community in Northern Ireland.

In a video posted on Twitter, Ms Long said: “While we will certainly miss having the gathering of the Pride parade, it is still nevertheless very important that we focus on what we have achieved over the past few years as a community and what we can achieve in the future by working together.”

“Obviously we have had big wins with equal marriage but we still have work to do to ensure those in civil partnerships can transfer them to be marriages if they wish to do so.”