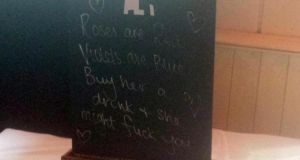 The Pygmalion bar in the Powerscourt Centre, Dublin, has this sign saying: ‘Roses are red, violets are blue, buy her a drink, and she might fuck you’

A sign in a Dublin bar saying “buy her a drink, and she might fuck you” has been described as “totally unacceptable” by groups working with victims of sexual violence.

The Pygmalion bar in the Powerscourt Centre in the Grafton Street area, said the display which consists of a small blackboard behind the bar with the slogan: ‘Roses are red, violets are blue, buy her a drink, and she might fuck you’, had been in place since Valentine’s Day and had not drawn any complaint.

Duty manager of the bar, Jerry Segs, said a female member of staff had written the slogan on the double-sided blackboard for Valentine’s Day. He said it was not always on display and the slogan on the other side, “Drunk is when you feel sophisticated but can’t pronounce it”, was more usually displayed: “We’re usually using the other side. If this side is out it’s a mistake.”

Concerns about the sign were raised with both the Dublin Rape Crisis Centre and the Rape Crisis Network of Ireland by member of the public Mary Enright, who saw it displayed, facing out through the bar’s glass wall and onto the central plaza, at 3pm on Sunday. “I was so offended and upset. I took a number of photographs of it.”

When asked about it having been clearly visible from within the centre, Mr Segs said the other side was displayed in the bar.

“I suppose it could be offensive but we have had no complaints. We could rub it out I suppose. We don’t want to offend anyone. It is just for fun. We want to make people happy. We want to bring people together.”

Clíona Saidléar, chief executive of the RCNI, said the slogan perpetuated the “falsehood that consent can be purchased, whether with one drink, two drinks or dinner. There is no consent except full consent.

“This sign says, ‘If you’re a predator, here’s a tactic.’ It does only refer to one drink, but it could be read as saying, ‘If you get her drunk she’s easy.’ The implication could be that alcohol makes her more available. It is totally unacceptable.”