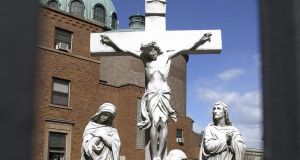 Plans by RTÉ to revamp the Angelus to make it accessible to “people of all faiths and none” have been described as discriminatory because it would remain a Catholic call to prayer.

Atheist Ireland, which campaigns for the separation of church and state, said the national broadcaster’s plan to retain the 18 peals of the Angelus bell during the “moment of reflection”, as well as continuing to call it the Angelus, amounted to the “facilitation of Catholic pre-evangelisation”.

It said RTÉ’s plan contravened the Broadcasting Authority of Ireland’s code of programme standards and called on the station to reconsider its plans for the slot in order to make it “genuinely inclusive”.

RTÉ has invited proposals for six new short films to be broadcast on RTÉ One television at 6pm every day in the Angelus slot before the main evening news.

The Angelus, a Catholic devotional prayer traditionally recited three times daily – at 6am, noon and 6pm – has been marked by RTÉ since 1950 on radio at noon and 6pm.

It is also broadcast on television at 6pm.

It was last revamped in 2009 when accompanying religious imagery was replaced with a film featuring people taking a minute for reflection.

A spokesman said it was RTÉ’s intention that “this reflective minute” should be accessible to people of all faiths and none.

He added: “The Angelus prayer itself is never broadcast in these slots and is not imposed on viewers.

“RTÉ has always given consideration to views expressed by Atheist Ireland and by the many groups and lobbies in order to strike a balance which best serves the interests of our licence-payers and honours RTÉ’s obligations under the Broadcasting Act to reflect the rich and diverse religious, spiritual and philosophical culture of Ireland.”

She added: “They wouldn’t dream of broadcasting a daily primetime programme that called on atheists to proclaim that there is no God, then respond to criticism from Catholics by telling them they can be ‘included’ by praying during that broadcast. Yet RTÉ seems unable to see how inappropriate this is in reverse.”

The RTÉ spokesman said there had been “a very positive response” to the invitation for short film proposals. He said the outcome from the process would be announced in the coming weeks.